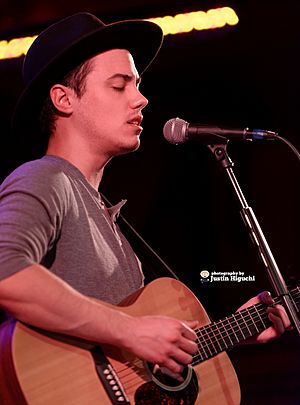 Leroy Sanchez (born September 1, 1991, in Spain) is a Spanish-born singer-songwriter currently based in Los Angeles, California.

Leroy Sanchez was born in Abetxuko, Vitoria, Spain, where he taught himself to play guitar. At the age of 15, Sanchez uploaded his first cover song on YouTube, and his videos have since received more than 400 million views and over 3.5 million subscribers. In 2010 Sanchez met producer Jim Jonsin, who brought him to Miami.

In 2016, he was nominated for a Premios Juventud Award, and a Teen Choice Award.

Sanchez headlined the Man of the Year tour, his first international run, from January to March 2017 and his Elevated Tour, from September to November 2017. Sanchez released his debut EP, Elevated on August 4, 2017. He also released this Christmas song "It ain't Christmas without you" Leroy's most viewed video on his YouTube channel is his cover of Adele's "Hello" with over 52 million views. He currently has over 4.26 million subscribers on YouTube. He released "Preacher" in 2018. He released in 2020 his first Spanish single called "Miedo" which has an acoustic official version too. The first version was promoted in Los 40 Principales in Spain. He released his Christmas EP called "The Greatest Gift" on 11/13/2020

All content from Kiddle encyclopedia articles (including the article images and facts) can be freely used under Attribution-ShareAlike license, unless stated otherwise. Cite this article:
Leroy Sanchez Facts for Kids. Kiddle Encyclopedia.