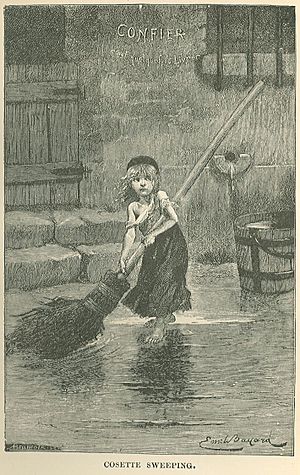 Cosette, one of the main characters, sweeping the floor.

Les Misérables is a novel by Victor Hugo. It was published in 1862. The story is about a former convict named Jean Valjean. He tries to find a meaningful life, but is followed by a police officer. The story has been made into movies several times. It has also been made into a musical. He is trying to run away after being convicted by the police since he stole bread to feed his sister.

The work describes French society between the reign of Napoleon and that of Louis Philippe I. One of the main characters, Marius, takes part in the June Rebellion.

Hugo based some of his characters on the lives of real people. That way, Valjean is probably based upon Eugène François Vidocq. He probably used the story of Bienvenu de Miollis to base the Bishop of Digne on. De Mollis was the bishop of Digne from 1805 to 1838. Enjolras, a revolutionary leader is probably based on Louise Michel, a French anarchist.

All content from Kiddle encyclopedia articles (including the article images and facts) can be freely used under Attribution-ShareAlike license, unless stated otherwise. Cite this article:
Les Misérables Facts for Kids. Kiddle Encyclopedia.