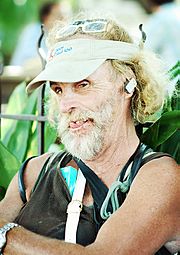 Albert Leslie Cochran (June 24, 1951 – March 8, 2012) was an American activist and homeless man. Cochran is known for his activism on the city of Austin, Texas. He might have created the motto "Keep Austin Weird".

On October 1, 2009, police officers found him unconscious outdoors. He was taken to the University Medical Center Brackenridge in critical condition. He claimed he was attacked by a group of people after commenting about the dangers of drug abuse.

All content from Kiddle encyclopedia articles (including the article images and facts) can be freely used under Attribution-ShareAlike license, unless stated otherwise. Cite this article:
Leslie Cochran Facts for Kids. Kiddle Encyclopedia.