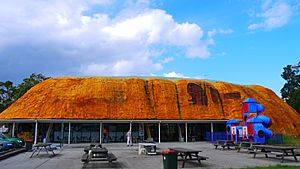 In November 1990 Leyland Brothers World was opened by the Leyland brothers on a 40-hectare property on the Pacific Highway at North Arm Cove on the Mid North Coast of New South Wales. It included a 1/40 scale replica of Ayers Rock, as well as amusement rides, playground, roadhouse, museum, a 1.8 610mm gauge circular railway and a 144 capacity bush camp.

In a 1997 article in the Sunday Age, Mike Leyland said that the initial $1 million loan blew out due to rain during construction and a 27% interest rate. In July 1992, BDO Nelson was appointed receiver and manager of the park after the Leyland brothers failed to meet its loan commitment to the Commonwealth Bank. Auctioneers Colliers Jardine estimated the annual attendance of the park to be about 400,000 people, with 10,000 students for the bush camp.

The theme park was sold by the receiver for $800,000 in November 1992 and continues to trade successfully as the Great Aussie Bushcamp. The Ayers Rock replica was destroyed by fire on 31 July 2018.

All content from Kiddle encyclopedia articles (including the article images and facts) can be freely used under Attribution-ShareAlike license, unless stated otherwise. Cite this article:
Leyland Brothers World Facts for Kids. Kiddle Encyclopedia.