This is a Chinese name; the family name is Li. 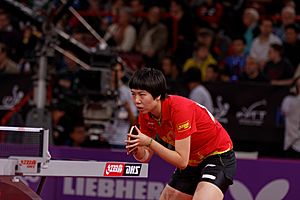 In the next year, Li couldn't win a lot of big titles, except the Asian Games, so she fell back in time to 8th place in the ITTF-rankings. In the doubles Li Xiaoxia became the 2009 and 2011 world-champion and won the 2011 world tour grand finals, too. In the singles, she became vice-world champion. In 2012, Li was for the first time nominated for the Olympics, where she beat Ding Ning in the finals, and won gold. With the team Li won gold, too.

In 2016 she played her lastest biggest event: At the Olympics, where she came to the final and lost to Ding Ning she won silver. At the team event she won gold.

All content from Kiddle encyclopedia articles (including the article images and facts) can be freely used under Attribution-ShareAlike license, unless stated otherwise. Cite this article:
Li Xiaoxia Facts for Kids. Kiddle Encyclopedia.