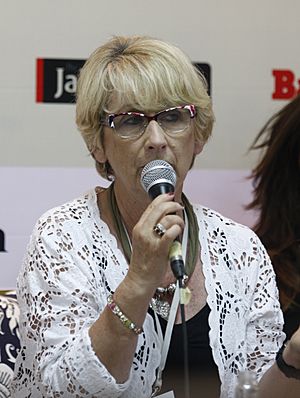 Elizabeth Helen "Libby" Hathorn (born 1943) is an Australian writer primarily for children, and a poet who works with schools, institutions and communities. She has received many awards for her books, some of which have been translated into several languages. In 2001 she was awarded a Centenary Medal for her contribution to children's theatre. In 2014 she was awarded the Alice Award for her contribution to Australian literature.

Hathorn was born in Newcastle, New South Wales. She attended Balmain Teacher's College (soon part of the New South Wales Institute of Technology) and worked as a teacher and librarian from 1965 to 1981. She has attained a Master of Arts, Macquarie University.

Hathorn's stories have been translated into several languages and adapted for stage and screen. Her work has won honours in Australia as well as in the United States, United Kingdom and the Netherlands. She was awarded a Centenary Medal in 2001 "for service to Australian society in writing for theatre for young people", and the Alice Award from the NSW Society of Women Writers in 2014. The latter is a national award for a woman writer "who for her written work has made a distinguished and long term contribution to Australian literature".

Hallmark Hall of Fame has made a movie of Hathorn's best-selling young adult novel, Thunderwith, re-titled The Echo of Thunder. It starred Judy Davis, who was nominated for an Emmy Award in the US for her performance as Gladwyn. In 2004 her children's picture storybook, Sky Sash So Blue, published in the United States, was performed as an opera in Birmingham, Alabama. Previously, Grandma's Shoes was performed as an opera by Opera Australia and Theatre of Image. Libby was awarded an AWGIE for the libretto based on this picture storybook, in 2001. Her CDROM series Weirdstop won the Australian Interactive Media Industry Awards (AIMIA), 2004 as Best Children's Product; and in 2005 the New South Wales Society of Women Writers' Bi-annual Award for Older Readers. Wonderstop won the Energy Australia National Trust Heritage Award (Education) 2007. Concerned about child homelessness, Hathorn wrote Way Home with illustrations by Greg Rogers which won the Kate Greenaway Award in the UK and a Parent's Choice in the USA. It was later produced as a play by Barking Gecko in WA. Recent children's picture books include Outside (Little Hare) A CBCA Notable Book 2014, being developed as a children's opera with Australian composer Elena Katz Chernin; and A Soldier, A Dog and a Boy illustrated by Phil Lesnie, (Hachette) a CBCA Notable Book 2017 and Asher Award winner 2017.

Hathorn has lectured part-time in Master of Arts, Creative Writing at Sydney University and is a frequent speaker at conferences and festivals. As an Australia Day Ambassador, she has travelled to country towns each year where she talks about the importance of Australian literature. Her novels include, Letters to a Princess, (ABC books, 2007); historical novel, Georgiana: Woman of Flowers (Hachette Livre); a play based on her picture storybook, The Tram to Bondi Beach (Currency Press, 2008); and Fire Song (ABC/Harper Collins, 2009) which was highly commended in the inaugural Prime Minister's Literary Awards. Her current Anzac novel is Eventual Poppy Day (Harper Collins, 2015) which was short-listed for the SWW Biennial Awards, 2016.

Poetry is an abiding passion for her, and many of her works are either written in poetry or inspired by poetry. She has devised and worked on an arts project entitled "100 Views" in several schools, both in Australia and internationally celebrating community through poetry and a festival; Power Poetry with the Powerhouse Museum; and video conferencing poetry workshops with the NSW State Library. In 2010 she compiled The ABC Book of Australian Poetry: A Treasury for Young People with artwork by Cassandra Allen (ABC/Harper Collins)and in 2013 she published Women's Work: A Collection of Contemporary Women's Poetry (Pax Press). Some of her recent picture books A Baby for Loving, illustrated by Tamsin Ainslie, and Outside, illus. Ritva Voularis (Hardie Grant/Egmont, Little Hare, 2014); and Butterfly, we're expecting you illustrated by Lisa Stewart (Hachette, 2017) are written in verse. During 2016 she worked with the NSW State Library who produced an Australian Poetry Series she scripted and directed on the lives of CJ Dennis, Henry Lawson and Dorothea Mackellar, to be launched 2018.

All content from Kiddle encyclopedia articles (including the article images and facts) can be freely used under Attribution-ShareAlike license, unless stated otherwise. Cite this article:
Libby Hathorn Facts for Kids. Kiddle Encyclopedia.