Library East (now known as Smathers Library) is a historic library in Gainesville, Florida, United States. It is located in the northeastern section of the University of Florida in the middle of the Campus Historic District. When it was first created it was the largest building on campus at that time.[1] It is a part of the George A. Smathers Libraries system and home to multiple collections of books and other library materials.

This facility was designed by the architect William A. Edwards and was first opened in October 1926. A major addition was designed by Florida Board of Control Architect Guy Fulton following World War II. On June 27, 1979, it was added to the U.S. National Register of Historic Places. In 1991 after a generous donation by the former United States Senator George Smathers the facility was officially renamed the Smathers Library.[2]

The Map & Imagery Library makes up a portion of the ground floor of the Smathers Library. It consists of several different collections which, combined, contain roughly 500,000 maps, 300,000 aerial photographs and satellite images, 8,000 atlases and reference books and an increasing number of geospatial datasets. It is one of largest academic map libraries in the United States. It specializes in content concerning Florida, Latin America, the Middle East and Africa and is open to the public every weekday. 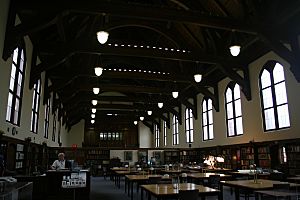 In January 2014, the Judaica Suite was opened as an annexing group of reading rooms accessed through the Special Collections Grand Reading Room. The alcoves of the Suite hold books from the University's Isser and Rae Price Library of Judaica, including many rare copies. Within the Suite, specific books are grouped together in different alcoves to represent various periods in the history of Jewish literature and culture. The Judaica Suite was designed by world-renowned architect and artist, and University of Florida alumnus, Kenneth Treister.

The Latin American and Caribbean Collection makes up the third floor of Smathers Library. This collection was founded in 1951, prompted by growing scholarly interest in Latin America and the Caribbean, and has since grown into one of the University of Florida's premier collections. The collection is housed in a newly renovated space and now consists of approximately 500,000 books, 50,000 microforms, thousands of journal titles and a considerable number of digital resources. About 70% of these resources are in Spanish, French, and Portuguese. Most of the remaining collection is in English, however, there are also materials in Haitian Creole, Dutch, and indigenous languages. Though the collection covers Caribbean and Latin American areas but focuses on the Caribbean and Brazil. Primary sources from the Caribbean are also available, ranging from agriculture to revolution. The library also has its own stacks, reading rooms, and reference services making it one of the few libraries left in the US to do so. The collection is open to the public and is usually open six days of the week.

All content from Kiddle encyclopedia articles (including the article images and facts) can be freely used under Attribution-ShareAlike license, unless stated otherwise. Cite this article:
Library East (Gainesville, Florida) Facts for Kids. Kiddle Encyclopedia.