Light Square, also known as Wauwi (and formerly Wauwe), is one of five public squares in the Adelaide city centre. Located in the centre of the north-western quarter of the Adelaide city centre, its southern boundary is Waymouth Street, while Currie Street crosses its northern tip, isolating about a quarter of its land. Morphett Street runs through the centre in a north-south direction.

It is one of six squares designed by the founder of Adelaide, Colonel William Light, who was Surveyor-General at the time, in his 1837 plan of the City of Adelaide which spanned the River Torrens Valley, comprising the city centre (South Adelaide) and North Adelaide. It was named after the city's founder and planner, Colonel William Light, on 23 May 1837, by the Street Naming Committee, and in 2003 it was assigned a second name, in the language of the original inhabitants, Kaurna, Wauwe (later corrected to Wauwi), as part of the dual naming initiative by the Adelaide City Council. Wauwi was the wife of Kadlitpina, a well-known Kaurna elder. 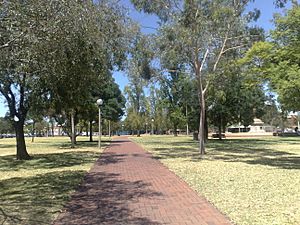 All content from Kiddle encyclopedia articles (including the article images and facts) can be freely used under Attribution-ShareAlike license, unless stated otherwise. Cite this article:
Light Square Facts for Kids. Kiddle Encyclopedia.