Linas and Simona facts for kids 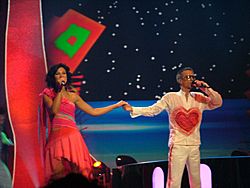 Linas and Simona performing at ESC 2004.

Linas and Simona was a duo, which represented Lithuania in the Eurovision Song Contest 2004. With 26 points they placed 16th in the semifinal and could not participate in the final. However, they befriended Ruslana, the winner of the Eurovision 2004, and together recorded Fight for Love and Freedom.

This song was released in album I Love U on 22 July 2005. In 2005 they were representatives of an anti-AIDS campaign in Lithuania. The couple separated in late 2007 ending the duo. Their last work, live album Linas and Simona presents UAB MUSIC Live featuring Stasys Povilaitis, Violeta Riaubiškytė, was released in February 2008.

All content from Kiddle encyclopedia articles (including the article images and facts) can be freely used under Attribution-ShareAlike license, unless stated otherwise. Cite this article:
Linas and Simona Facts for Kids. Kiddle Encyclopedia.