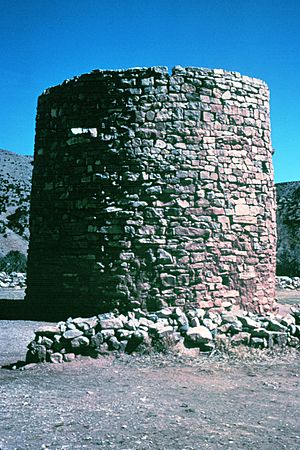 The Torreon, a rock fort tower where settlers hid during Indian raids.

Lincoln is an unincorporated community in Lincoln County, New Mexico, United States, located approximately 57 miles (92 km) west of Roswell (by road) and just south of the Lincoln National Forest. The town had a population of about 800 in 1888, and Main Street has been preserved by current residents. The community lies on U.S. Route 380.

Originally called Las Placitas del Rio Bonito by the Spanish families who settled it in the 1850s, the name of the community was changed to Lincoln when Lincoln County was created in January 16, 1869. Lincoln county was founded by five cultures. First discovered and lived on by Natives, discovered again by Conquistadores, settled by Mexicans, then re-established by Anglo-Americans. It was named after Abraham Lincoln.

Lincoln was at the center of the Lincoln County War, 1876-1879, and is the historical home of Billy the Kid. The village holds an annual festival in August featuring an open-air enactment of The Last Escape of Billy the Kid.

For about a year during World War II, the Old Raton Ranch, an abandoned Civilian Conservation Corps camp on the outskirts of Lincoln, was used to confine Japanese American railroad workers and their families. All 32 internees came from Clovis, New Mexico; the town's entire Japanese American population was placed under house arrest shortly after the attack on Pearl Harbor brought the U.S. into the war, and the Immigration and Naturalization Service "evacuated" them to Lincoln on January 23, 1942. Unlike the "assembly centers" where most Japanese Americans spent the first months of their wartime incarceration, access to school, employment and recreational activities was not permitted in Lincoln. On December 18, 1942, the internees were transferred to several of the more public concentration camps run by the War Relocation Authority.

The Lincoln Historic District was made a National Landmark in 1960 .

All content from Kiddle encyclopedia articles (including the article images and facts) can be freely used under Attribution-ShareAlike license, unless stated otherwise. Cite this article:
Lincoln, New Mexico Facts for Kids. Kiddle Encyclopedia.