Lincoln Village is a census-designated place (CDP) in Prairie Township, Franklin County, Ohio, United States. It is centered near the intersection of US 40 and I-270 on the west side of Columbus. As of the 2010 census, the population was 9,032, down from 9,482 at the 2000 census.

Lincoln Village was started in 1955 as a planned community by a real estate subsidiary of Nationwide Insurance. The community was developed to have all the essentials, such as a shopping center, schools, and parks, and to incorporate safety considerations such as not positioning the homes on street corners to eliminate blind intersections.

Ohio Farm Bureau Federation President and CEO Murray Lincoln had aspired to create a suburban "village" since the early 1940s. Lincoln, as the head of what would become Nationwide Insurance from 1920 to 1948, initiated work on the Lincoln Village project in the early 1950s with the support of the U.S. Cooperative Movement. of farmland in western Columbus for the construction of Lincoln Village, with churches, a school, wooded park, playgrounds, and a library. A shopping center would also be built. Housing in the village was to include apartment buildings and single family homes priced between $9,000 to $16,000.

The Pennsylvania Railroad borders Lincoln Village to the north, Sullivant Avenue to the south, and Interstate 270 to the east. The western border of Lincoln Village follows Hilliard Rome Road and Norton Road, the larger northwest portion by Hilliard-Rome Road and the smaller southwest portion by Norton Road. U.S. Route 40 (the National Road, known as W. Broad Street within the community) runs through the center of town, leading east 9 miles (14 km) to the center of Columbus. The city of Columbus borders Lincoln Village to the north, west, and south; a portion of Franklin Township is to the east, across I-270.

According to the United States Census Bureau, Lincoln Village has a total area of 1.83 square miles (4.75 km2), all land.

There were 4,188 households out of which 24.3% had children under the age of 18 living with them, 37.9% were married couples living together, 15.8% had a female householder with no husband present, and 39.3% were non-families. 31.8% of all households were made up of individuals and 12.9% had someone living alone who was 65 years of age or older. The average household size was 2.42 and the average family size was 3.04. 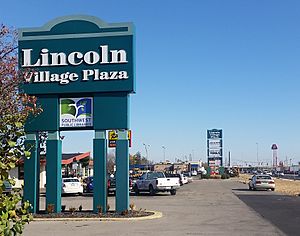 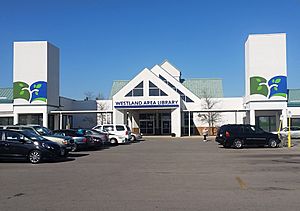 All content from Kiddle encyclopedia articles (including the article images and facts) can be freely used under Attribution-ShareAlike license, unless stated otherwise. Cite this article:
Lincoln Village, Ohio Facts for Kids. Kiddle Encyclopedia.