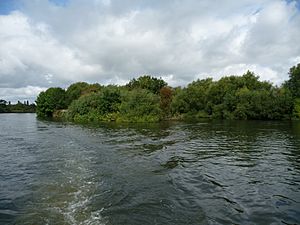 The island is the relict of three long parallel islands which existed at this point before the creation of the Old Windsor Lock cut. One of these was called Nickcroft Ait, and an obstruction known as "Newman's Bucks" existed between two of them

All content from Kiddle encyclopedia articles (including the article images and facts) can be freely used under Attribution-ShareAlike license, unless stated otherwise. Cite this article:
Lion Island (Old Windsor) Facts for Kids. Kiddle Encyclopedia.