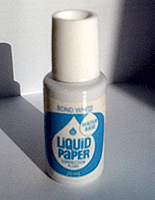 Liquid Paper, also called white out and correction fluid, is used to correct mistakes made in writing on typewriters and with ink. It was originally called Mistake Out and was invented by Bette Nesmith Graham in 1951, who was working at a bank in the U.S. state of Texas at time and had trouble when she typed on the typewriter, which was part of her job. She made in product in her blender and sold it to friends starting in 1956. She sold the product to the Gillette Corporation for 47.5 million US Dollars in 1979. When she died the following year, her son, Michael Nesmith, a famous musician, formally of The Monkees inherited the fortune.

Now people still use the correction fluid, but more seldom. With more advanced technology, people have computers allowing them to backspace easily, not needing to use it. Also, there is also another recent invention of the correction tape. To use the fluid, you squeeze the bottle, and let the fluid flow out to cover the mistakes. Usually you have to shake the bottle before using it, and after using, you need to wait for it to dry for a few minutes, which is considered quite fast. Then you can write on top of the dried fluid.

All content from Kiddle encyclopedia articles (including the article images and facts) can be freely used under Attribution-ShareAlike license, unless stated otherwise. Cite this article:
Liquid Paper Facts for Kids. Kiddle Encyclopedia.