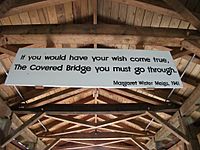 A legend appearing on a covered bridge in Fort Hunter, Pennsylvania.

In the early 1800s, the first covered bridge in the United States was constructed by Timothy Palmer crossing the Schuylkill River at 30th Street in Philadelphia. This new bridge type, wooden with a covered span, was developed because traditional European methods, typically stone bridges, were not appropriate for the harsh Pennsylvania winters. Many of the bridges were named for pioneer families residing near the bridges.

Some people call Pennsylvania the "Covered Bridge Capital of the Nation".

All content from Kiddle encyclopedia articles (including the article images and facts) can be freely used under Attribution-ShareAlike license, unless stated otherwise. Cite this article:
List of covered bridges on the National Register of Historic Places in Pennsylvania Facts for Kids. Kiddle Encyclopedia.