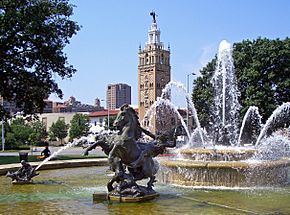 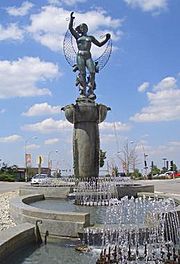 Muse of the Missouri, by Wheeler Williams, downtown, Main Street at 9th Street. 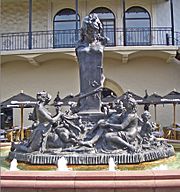 Pomona, fountain sculpture by Donatello Gabbrielli, at Ward Parkway & Broadway, in The Plaza.

Fountains in Brush Creek, along Ward Parkway, in The Plaza.

Mermaid Fountain, at Nichols Road & Broadway, in The Plaza. 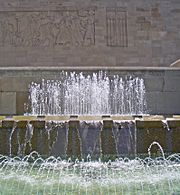 A fountain at Liberty Memorial. 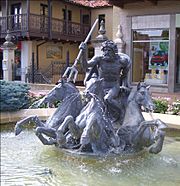 Diana (and Cherubs), fountain sculpture, at Ward Parkway & Wornall Road, in The Plaza. 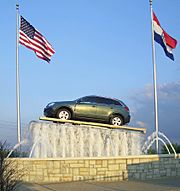 In 1992, the city added "City of Fountains" to its official corporate seal.

Fountains form part of the Kansas City's core identity and culture, and it even used a graphic design of a stylized fountain in its official logo. Interest in fountains arose during the City Beautiful movement in the 1890s. In 1898, George Kessler, a landscape architect and urban planner, designed the first fountain built by the city of Kansas City, Missouri at 15th and The Paseo. Although it was destroyed in 1941, another fountain that he designed the same year still exists and remains the oldest in the city. Now known as The Women's Leadership Fountain, it is located at 9th Street and The Paseo. The design originally included an oval, cut limestone basin with water spraying upwards from nozzles in the center of the its pool surrounded by a raised sidewalk, a flower garden, gas lamps, and a balustrade above to the south. The fountain was rebuilt in 1970 and 1990 and began its third major restoration in January 2008 planned for completion in 2009. Kessler went on to include numerous plans for fountains in his urban designs of the park and boulevard system.

Typically, most of the first fountains in Kansas City served practical rather than decorative purposes. In 1904, the Humane Society of Kansas City (Kansas) – established to prevent cruelty to women, children and animals – built a characteristic fountain near the west end of Minnesota Avenue at North 3rd Street. Water poured out of spigots in lions' mouths so that people could get clean water in their cups. This water fell into a granite basin at a height for horses to drink. The overflow from the basin went into four small pools at street level for dogs to drink. A street light was on top; in 1967, the fountain was given to the Wyandotte County Museum. The Humane Society went on to mount more than 100 fountains, including ones made of bronze created for people alone for sanitary purposes.

Fountain building and the use of decorative statuary exploded in the 1920s after developer J.C. Nichols used them extensively in the development of Country Club Plaza. The most famous fountain in Kansas City is appropriately named J.C. Nichols Memorial Fountain. The figures were originally created by French sculptor Henri-Léon Gréber in 1910 for "Harbor Hill," the estate of Clarence Mackay in Roslyn, New York. The four allegorical equestrian figures reportedly represent four great rivers of the world — the Mississippi River, Volga River, Seine River, and Rhine River. The work is enlivened by sculptures of little children riding dolphins in the pool surrounding the main figures.

The William Volker Memorial Fountain includes the last sculptures by Swedish artist Carl Milles. The five-piece ensemble of bronze statuary shows Saint Martin of Tours, patron saint of France, on horseback, giving his clothes to a beggar surrounded by two angels (one amusingly wearing a wristwatch) and a curious little demon in hiding. The sculptures rest between two pools of water with jet sprays along Volker Boulevard, and sits above a dramatic three-tier, 28 ft (8.5 m) waterfall into a basin on Brush Creek.

The Eagle Scout Memorial Fountain was originally part of the Seventh Avenue clock created by A.A. Weinman for the Pennsylvania Station in New York City. When the station was torn down, Kansas City petitioned to obtain the clock sculpture and replaced its face with an Eagle Scout tribute.

The "Waterworks Spectacular" has been dousing the outfield during baseball games at Kauffman Stadium for over 30 years.

All content from Kiddle encyclopedia articles (including the article images and facts) can be freely used under Attribution-ShareAlike license, unless stated otherwise. Cite this article:
List of fountains in the Kansas City metropolitan area Facts for Kids. Kiddle Encyclopedia.