Telugu cinema, consisting primarily of movies in the Telugu language in the Indian states of Andhra Pradesh and Telangana. It is popularly called as Tollywood. It is one of the largest movie production centers in India. 1992 film Gharana Mogudu, directed by K. Raghavendra Rao, is the first Telugu film to gross over

10 crore at the box office.

The following is the list of highest grossing Telugu films (including dubbed versions) based on world wide collections (gross and distributors share).

NOTE: Since Tollywood collection figures have no certain sources, figures are provided on the basis of many sources. Though figures contradicted with some reliable sources in some cases, figures which are cited in most sources are only included. 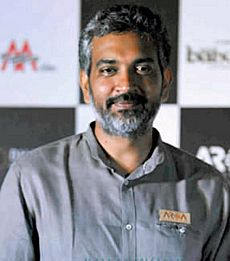 The USA gross figures of Top-20 tollywood movies are given here.

All content from Kiddle encyclopedia articles (including the article images and facts) can be freely used under Attribution-ShareAlike license, unless stated otherwise. Cite this article:
List of highest-grossing Telugu movies Facts for Kids. Kiddle Encyclopedia.