List of tallest buildings in Bellevue, Washington facts for kids 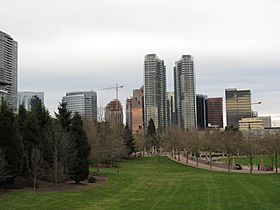 Part of the Bellevue skyline 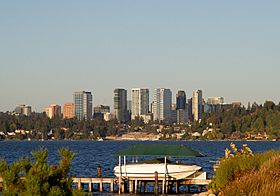 The city of Bellevue, Washington, in the Seattle metropolitan area has at least 41 high-rise buildings, 23 of which stand 250 feet (76 m) or taller in height. Downtown Bellevue started to develop into a high-rise office district in the 1970s and continues to grow, with new residential buildings being added in the late 2000s. The tallest buildings in the city, measuring 450 feet (140 m) in height, are the 42-story Lincoln Tower One, W Hotel at Lincoln Square, and the 43-story Bellevue Towers Two. Lincoln Tower One was the first skyscraper to reach the city's 450-foot (140 m) height limit upon completion in 2005.

Bellevue's history of high-rise development began with the completion of the Paccar Tower in 1970; this structure is regarded as the city's first high-rise. High-rise building construction remained slow until 1982, when the city's first building boom took place. Eight of the city's 24 tallest buildings were completed over the next seven years, including City Center Bellevue, which was the tallest building in the city for almost two decades. The high-rise construction boom ended in 1989, and only one high-rise which ranked among the city's tallest structures was completed during the 1990s. From 2000, Bellevue entered into a second, much larger building boom that continued for the next decade. More than half of Bellevue's twenty tallest buildings were completed from then on; nine projects were completed in 2008 alone, including Bellevue Towers. With the groundbreaking of the SoMa Towers project in 2012, the city entered another period of heavy building construction. The largest recent developments under construction are the W Bellevue Hotel (500 Lincoln Square) and 400 Lincoln Square; both of these buildings constitute the southward expansion of Lincoln Square and stand approximately 450 feet (140 m) tall. In 2017, the city raised height limits to allow for buildings as tall as 600 feet (180 m) in some areas of the downtown core. As of 2021, there are eight 600-foot (180 m) skyscrapers that are either proposed, approved, or currently under construction.

Overall, Bellevue's skyline is ranked third in the Northwestern United States after Seattle and Portland.

A panoramic of Bellevue's skyline from Downtown Park.

A panoramic of Bellevue's skyline from the southwest

This list ranks Bellevue's buildings that stand at least 150 feet (46 m) tall, based on standard height measurement. This includes spires and architectural details but does not include antenna masts. The "Year" column indicates the year in which a building was completed.

This lists buildings that are under construction in Bellevue that are expected to rise over 150 feet (46 m), but are not yet completed structures.

This lists buildings that are approved for construction that are expected to rise over 150 feet (46 m), but have not started excavation.

This lists buildings that are proposed for construction that are expected to rise over 150 feet (46 m), but have not been approved.

* Table entries with dashes (—) indicate that information regarding building heights or dates of completion have not been released.

This is a list of buildings that once held the title of tallest building in Bellevue.

All content from Kiddle encyclopedia articles (including the article images and facts) can be freely used under Attribution-ShareAlike license, unless stated otherwise. Cite this article:
List of tallest buildings in Bellevue, Washington Facts for Kids. Kiddle Encyclopedia.