List of theaters in Omaha, Nebraska facts for kids

This is a list of theaters in Omaha, Nebraska. The entries include theaters used to present films and professional live performances, including vaudeville acts, plays and musical performances.

In 1860, the dining room of the Herndon House hosted for the first dramatic performance in Omaha, using a borrowed bolt of muslin for a curtain. Julia Dean Hayne, a leading actress of the time, played the title role. These were the humble beginnings of Omaha's performing arts scene. Today the city is home to the Omaha Community Playhouse, a nationally recognized community theater; the Holland Performing Arts Center; the beloved Orpheum Theater; and a host of other smaller performing arts venues.

With more than 100 theaters since it was incorporated, Omaha's movie scene has never been static. Many of the early movie film theaters in Omaha were neighborhood theaters, small store-front establishments seating about 300 people on plain plywood seats. Most of the patrons of these early theaters walked to them or took street cars, so parking was not an issue. Larger theaters were congregated in Downtown Omaha, mainly along Douglas Street between Fourteenth and Sixteenth Streets, on what was called Theater Row. As personal automobile ownership increased, suburban theaters were built, and several drive-in theaters opened on what was then the outskirts of the city. Today, theater complexes with luxury seating, in-auditorium dining and bar service are prevalent. Omaha's last drive-in theater closed in 1987. 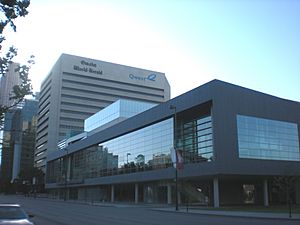 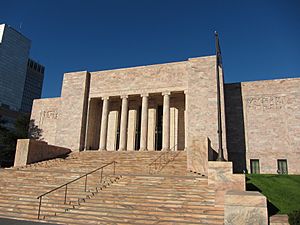 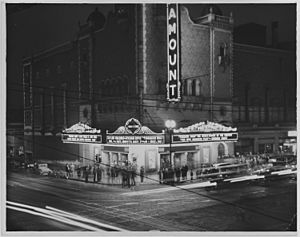 Theaters of the past 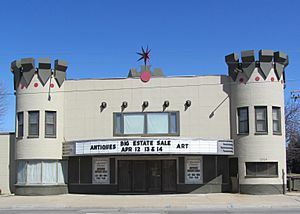 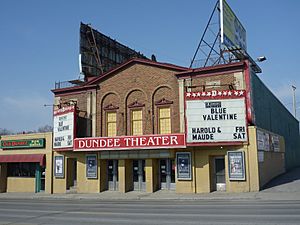 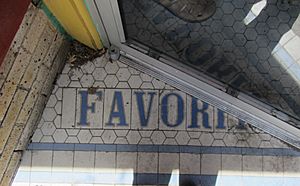 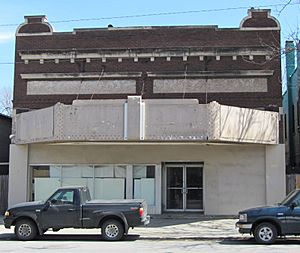 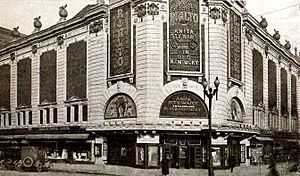 All content from Kiddle encyclopedia articles (including the article images and facts) can be freely used under Attribution-ShareAlike license, unless stated otherwise. Cite this article:
List of theaters in Omaha, Nebraska Facts for Kids. Kiddle Encyclopedia.