The Rose Blumkin Performing Arts Center or The Rose, also known as the Astro Theater, originally opened as The Riviera. It is located in downtown Omaha, Nebraska. Built in 1926 in a combination of both Moorish and Classical styles, the building was rehabilitated in 1986. 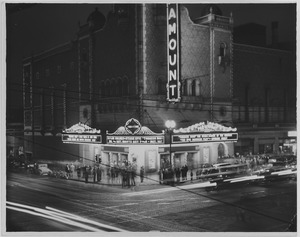 Noted for lavish stage shows combined with movies, the Riviera was regarded as one of the most elegant entertainment facilities in the Midwest. John Eberson, a nationally notable architect, built the theater as an example of the "atmospheric" theater popular during the 1920s. In a style created by Eberson, these atmospheric theaters simulated romantic outdoor Mediterranean courtyards with a night sky above, including twinkling stars and drifting clouds.

In 1929, experiencing financial losses, the theater's owner sold the building to Paramount Company and the theater was renamed the Paramount Theater. In 1957, Paramount vacated the lease to Creighton University. Closed for several years, it was later leased to J.S.B. Amusement, and after renovations, was operated as a bowling alley. After only a year of operation, the building once again was remodeled to return it to a theater. It reopened as the Astro theater and continued operations until June 1980.

Now closed and facing possible demolition, Creighton University sold the Astro Theater to Rose Blumkin of the Nebraska Furniture Mart on June 24, 1981. In the early 1990s it was renovated and transformed into the Rose Blumkin Performing Arts Center; it became the home of the Omaha Theater Company, which began performing there in 1995.

All content from Kiddle encyclopedia articles (including the article images and facts) can be freely used under Attribution-ShareAlike license, unless stated otherwise. Cite this article:
Rose Blumkin Performing Arts Center Facts for Kids. Kiddle Encyclopedia.