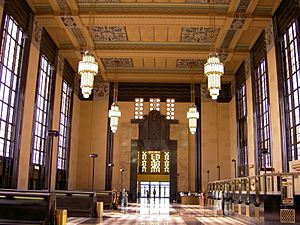 This article covers Omaha Landmarks designated by the City of Omaha Landmark Heritage Preservation Commission. In addition, it includes structures or buildings listed on the National Register of Historic Places and those few designated as National Historic Landmarks, indicating their varying level of importance to the city, state and nation.

Omaha has sought to preserve its historic landmarks for more than 50 years. The first city report on historical sites written in 1959, and the first buildings in the city were listed on the National Register of Historic Buildings in the 1960s. The demolition of the Old Post Office in 1966, along with the Old City Hall the next year, were rallying points for preservationists in the city. Omaha developed a comprehensive plan for landmark preservation in 1980.

Some years, the demands of changing business in Downtown Omaha have overridden the desires of preservationists to maintain historic structures. In 1989, all 24 buildings of the area's "Jobbers Canyon" were demolished, representing the highest number of buildings lost at one time that were listed on the National Register of Historic Places to date. The Christian Specht Building is the only extant building with a cast-iron facade known in Nebraska today, and one of the few built in the state.

The Burlington Train Station, also a downtown historic landmark, sat empty for more than thirty years and was stripped of much of its historical grandeur. In 2006 a group of developers began renovating the building for mixed-use, which will include residential condos. Not all of the buildings lost are deemed significant; the Omaha Auditorium, designed by noted and prolific local architect John Latenser, Sr., was almost universally panned for its gaudy and half-completed construction.

In North Omaha, the historic Strehlow Terrace apartments have been renamed "Chambers Court" in honor of locally renowned Nebraska Legislator Ernie Chambers. Fort Omaha, an Indian War-era supply depot for the United States Army, has been re-purposed as a local community college.

In April 2001 the Nebraska Methodist Health System purchased the Indian Hills Theater on West Dodge Road and. In June it announced plans to demolish the theater and replace it with a parking lot. Indian Hills was the last drum-shaped, three-projector Cinerama theater in the United States. Despite grassroots formation of the Indian Hills Preservation Society, letters of support from Charlton Heston, Janet Leigh and Kirk Douglas, and the unanimous vote of the Omaha Landmarks Heritage Preservation Commission finding that the theater should be declared a Landmark of the City of Omaha, in August 2001 the building was demolished.

The first comprehensive preservation ordinance in Nebraska was adopted by the Omaha City Council in 1977. The commission was created after the demolition of the Old Post Office, when the pro-preservation organization Landmarks, Inc. advocated its creation.

As of 2007, more than 90 buildings and structures in Omaha have received federal historic preservation tax incentives, and have been listed by the City of Omaha as Certified Historic Rehabs.

The Burlington Station, a contributing property to the Omaha Rail and Commerce Historic District in Downtown Omaha.

The 1878 General Crook House, a contributing property to the Fort Omaha Historical District. 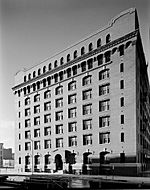 The Nash Block is the last remnant of the Jobbers Canyon Historic District. 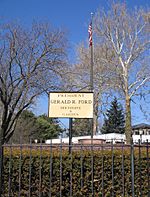 The Gerald R. Ford Birthsite and Gardens is located in the Field Club Historic District.

The Near North Side is home to several properties listed on the National Register of Historic Places. 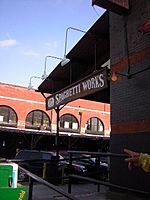 Spaghetti Works is a business located in the Old Market Historic District. 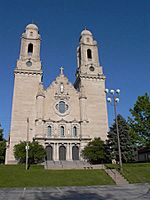 St. Cecilia Cathedral is a contributing property to the Gold Coast Historic District.

The Webster Telephone Exchange Building is the current location of the Great Plains Black History Museum.

The Grand Court of the 1898 Trans-Mississippi Exposition was located in Kountze Place on the current site of Kountze Park in North Omaha.

The USS Hazard is a National Historic Landmark located in Freedom Park.

Front view of the Livestock Exchange Building at the South Omaha's Union Stockyards.

The Joslyn Castle is in the heart of the Gold Coast Historic District. 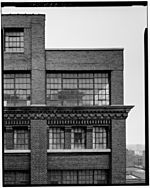 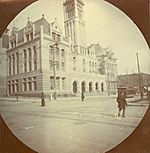 A 1910 postcard shows the historic columns at the front entrance of Omaha's Burlington Station.

Current entrance to the historic Ford Hospital in Midtown Omaha.

Being listed on the NRHP or as an Omaha Landmark does not permanently protect buildings against destruction. Several landmarks in Omaha have been demolished through a variety of fashions. 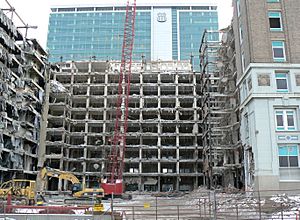 Demolition of the Old Union Pacific Headquarters in Downtown Omaha in fall 2008.

All content from Kiddle encyclopedia articles (including the article images and facts) can be freely used under Attribution-ShareAlike license, unless stated otherwise. Cite this article:
List of Omaha landmarks Facts for Kids. Kiddle Encyclopedia.