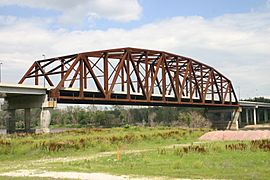 The new South Omaha Veterans Memorial Bridge from south on Nebraska side.

Omaha floated a $2 million bond issue for the bridge in 1931. However, when the bonds did not sell, the Omaha Bridge Commission was formed to secure financing from the Public Works Administration. The initial design by the Kansas City architects Ash, Howard, Needles and Tammen called for the bridge to have seven spans. However, when the War Department announced plans to reroute the river channel, the design was changed to two 525-foot (160 m), continuously supported, Warren through spans and a series of Warren deck truss approach spans.

The original bridge's demolition in progress

The bridge provided a much-needed direct route across the Missouri River to the Omaha Stockyards for livestock delivery trucks. Before the South Omaha Bridge was built trucks had to cross the Douglas Street Bridge and drive through downtown Omaha to reach the packinghouse district. Although listed on the National Register of Historic Places in 1992, the bridge was torn down so a new four-lane girder bridge could be constructed with a target opening date in 2010. The old bridge was 4,378 feet (1,334 m) long and provided a clear roadway width of only 22 feet 6 inches (6.86 m). In November 2006 Nebraska placed a 5-ton vehicle limit on the bridge. On June 11, 2008, an additional height restriction requiring vehicles to be under 8 feet (2.4 m) was imposed. On September 8, 2009, at 9 am CDT, the bridge closed so that the new bridge's construction could continue. The original bridge was completely demolished by March 2010 and removed from the NRHP in 2011.

All content from Kiddle encyclopedia articles (including the article images and facts) can be freely used under Attribution-ShareAlike license, unless stated otherwise. Cite this article:
South Omaha Veterans Memorial Bridge Facts for Kids. Kiddle Encyclopedia.