List of waterfalls of the Delaware Water Gap facts for kids

Buttermilk Falls is one of the tallest waterfalls of New Jersey. A dirt road (closed to vehicles in the winter) goes past its base. A series of steps lead to observation platforms further up the waterfall, which is nearly 100 feet high. A trail continues eastward from the topmost platform, reaching the Appalachian Trail, about 1100 feet higher in elevation than the base of the falls, in about 1.4 miles. The waterfall is near the north end of the Delaware Water Gap National Recreation Area in New Jersey. 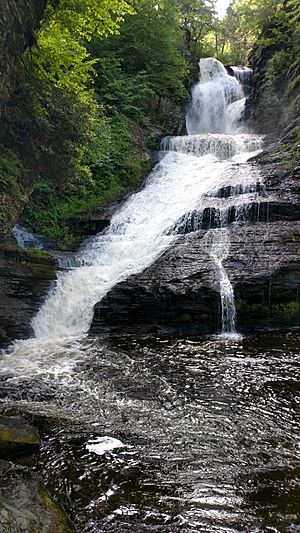 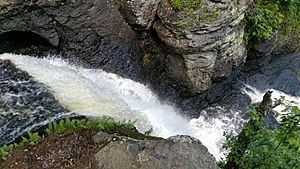 Dingmans Falls is the second highest waterfall in the state of Pennsylvania with a plunge of 130 feet. It is located at the northern end of the park. There is a beautiful boardwalk that leads you to the base of the Waterfall where you can see the 80 foot cascading drop. This boardwalk is roughly a half a mile long and only takes you to the base of the fall. the broad walk include the sites of Dingmans Falls and Silverthread Falls. You can continue on up a series of stairs to the waterfall and see the entire 130 foot plunge from the birds eye view. The best time to go see this waterfall is about 24 hours after a good rain then it will be flowing fast a steady. This is most known waterfall of Delaware Water Gap National Recreation Park. 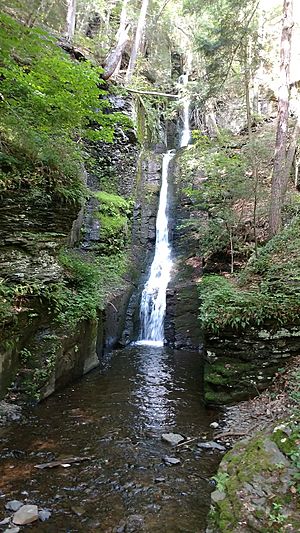 Silverthread Falls is a waterfall that is passed on the way to see Dingmans falls. It is also located in upper Pennsylvania not even a half a mile from Dingmans Falls via the boardwalk. This waterfall very steep it has a drop of about 80 feet with a narrow channel constructed by prominent rock-joints faces. It only drains about a square miles and the volume flow is way less than Dingmans Falls.

Factory Falls is located on the George W. Childs Park Trail in Pennsylvania, it follows Dingmans Creek so you are very close to Dingmans falls. The Brooks Family ran a woolen mill from 1823 to 1832 next to this fall, the remains of the mill can be seen next to the fall. You will take a single path through the woods that runs on both sides of the creek that is roughly 1.5 miles in length. This waterfall is the first one in a set of three that is on this traill. Factory falls drops twice and makes a 90 degree turn with the creek. 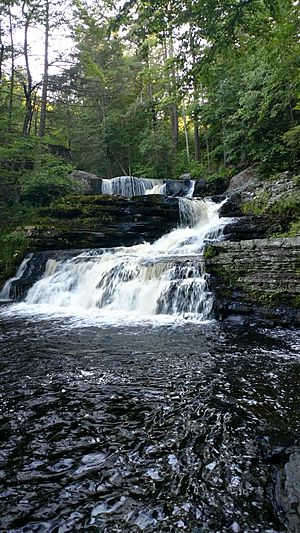 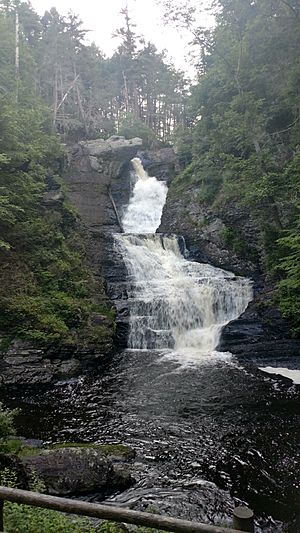 Fulmer Falls is the second waterfall you will see on the George W. Childs Park Trail in Pennsylvania right after Factory Falls. This fall is 56 feet tall and is the largest in George W. Childs Park. This waterfall has a unique feature of falling in a semi-circular basin of rock and then flowing downstream. The base of this waterfall is not accessible unless the fence is jumped, this is not prohibited.

The third last fall of the trail of George W. Childs Park is Deer Leap Falls. There is a bridge over top of the falls that gives it a very majestic look. The fall itself can be seen from all sides well including above because the bridge allows site-seers to walk on top of the fall. There is a very large wide shallow pool at the bottom of the fall, swimming and wading are not permitted. However this does not stop a lot of people from getting into the water for a selfie. The walk back is about three quarters of a mile before the parking area is back in view. 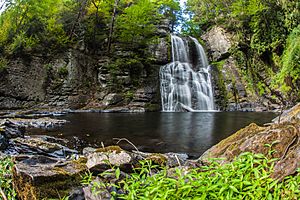 There are eight waterfalls in and more than two miles of trail for these 300 acres located in Pennsylvania also near the top of Delaware Water Gap National Recreational park. The drop of the main fall of Bushkill Falls is about 100 feet. While the drop from the first falls to the bottom of the lower gorge is about 300 feet. This set of falls is on privately owned land, and has an admission charge. They are advertised with the slogan "The Niagara of Pennsylvania". 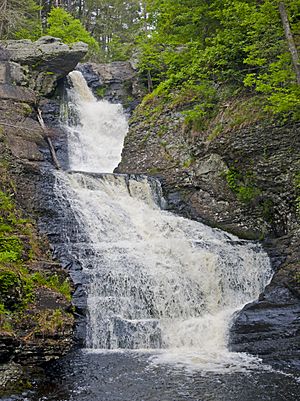 Van Campens Glen Falls is the terminus of the Lower Van Campens Glen trail hike near Walpack, NJ. The top of the falls features a deep, large pool that cascades down a slanted rock face. The areas surrounding the upper pool require extreme caution as this area has been responsible for numerous accidents and deaths in years past.

All content from Kiddle encyclopedia articles (including the article images and facts) can be freely used under Attribution-ShareAlike license, unless stated otherwise. Cite this article:
List of waterfalls of the Delaware Water Gap Facts for Kids. Kiddle Encyclopedia.