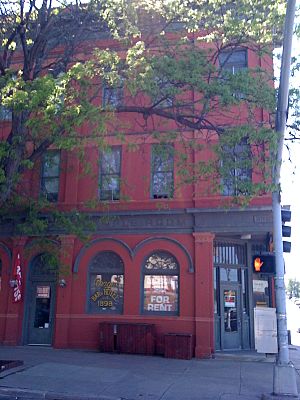 Little Bohemia, or Bohemian Town, is a historic neighborhood in Omaha, Nebraska. Starting in the 1880s, Czech immigrants settled in this highly concentrated area, also called "Praha" (Prague) or "Bohemian Town", bounded by South 10th Street on the east, South 16th Street on the west, Pierce Street on the north, and Martha Street on the south, with a commercial area went along South 13th and South 14th Streets, centered on William Street. It was located south of downtown, and directly west of Little Italy. A portion of the neighborhood along South 13th Street was listed on the National Register of Historic Places in 2020. 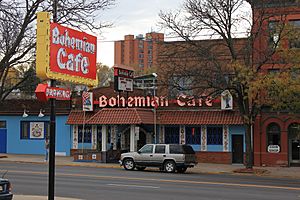 Early Czech immigrants from Austria-Hungary found work in Omaha's meatpacking industry, at the American Smelting and Refining Company lead smelter north of downtown, or at the Union Pacific shops. Institutions in the community included the Prague Hotel, built by Gottlieb Storz in 1898; Sokol Auditorium, built in 1926 by one of Omaha's four sokols, and St. Wenceslaus Church, a Czech Catholic Church. By 1919 the community also had a general store, grocery, dry goods store, a bakery, a shoemaker, saloon, milliner, and doctor.

As South Omaha's meatpacking industry grew, many Czechs moved from Bohemia Town to South Omaha, closer to their employment. Later concentrations of Czechs developed on the east side of South Omaha. The Immigration Act of 1924 was largely responsible for ending large-scale immigration of Czechs to Omaha.

The Little Bohemia neighborhood has had several important landmarks.

All content from Kiddle encyclopedia articles (including the article images and facts) can be freely used under Attribution-ShareAlike license, unless stated otherwise. Cite this article:
Little Bohemia (Omaha, Nebraska) Facts for Kids. Kiddle Encyclopedia.