The Little Loomhouse is a place on the National Register of Historic Places in the Kenwood Hill neighborhood on the south side of Louisville, Kentucky. It consists of three cabins constructed between 1870 and 1896: Esta Cabin, Tophouse, and Wisteria Cabin. It not only displays weavings, but has active education and resident artist programs. The organization participates in several local festivals, giving demonstrations of spinning, dyeing, and weaving. It is the biggest repository of original and classic textile patterns in the United States.

Among the history of the cabins have been the visits of past First Ladies of the United States, and the creation of the song Happy Birthday to You. However, it is in constant state of defending against deterioration. 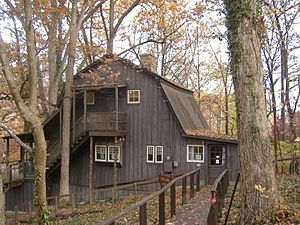 The Esta Cabin encapsulates the history of the Loomhouse, and is the cabin where the song "Happy Birthday to You" was first sung.

Wisteria, which houses the office and giftshop, was built in 1895 and similarly became endangered. In fact, it had to be closed for years due to erosion damage; in 1986, Jefferson County Judge/Executive Harvey Sloane helped in a rededication ceremony celebrating the restoration of the cabin. 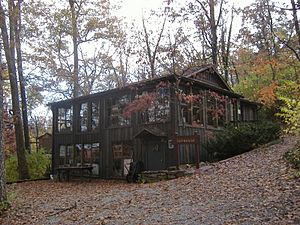 The Tophouse was built as a summer home for the well-to-do Sam Stone Bush in 1896. It was made of oak harvested from the hill upon which it stands. It was acquired by Tate in 1939 for using her looms. Since that time it has been used for looms, save during World War II when supplies dwindled, and she rented out the cabin for both funding and providing a defense worker's family a place to live. Although endangered by development in the 1960s and 1970s, it still stands today as the home of the looms from which the Little Loomhouse gains its name, and where weaving is still taught. 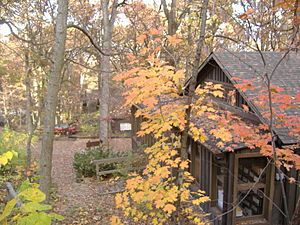 Looking downhill at the cabins

In his 1948 visit to Louisville, Frank Lloyd Wright praised both the cabins and the setting. In 1940, he described it as "board-and-batten summer houses, set down in the dignity of nature".

In 2007, the cabins were deteriorating. Stefanie Buzan put it succinctly: "They weren't built to last this long." Problems include tree trimming, sagging floors, and preventing the cabins from falling down the side of Kenwood Hill by using reinforcements. It is hoped that a second edition of Buzan's book will raise funds for these needed repairs, as the money made normally by the Loomhouse is not enough for the needed repairs.

All content from Kiddle encyclopedia articles (including the article images and facts) can be freely used under Attribution-ShareAlike license, unless stated otherwise. Cite this article:
Little Loomhouse Facts for Kids. Kiddle Encyclopedia.