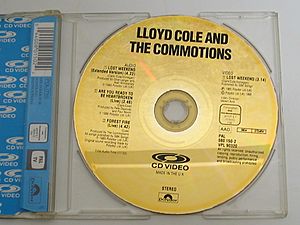 A compact disc within an open jewel case

For other uses, see: Album (disambiguation)

An album is a collection of sound recordings. It is usually made by a musician, and is sold in stores to people. Albums today mainly come in the form of compact discs, although many artists also release their albums on vinyl records.

Other types of albums include:

Albums are normally separated into Tracks. Each track is a part of the album which has one song in it. The term is often used to mean a specific song on the album by number. For example, the "fourth track" or "track four" from an album is the fourth song on the album when it is played from the beginning.

All content from Kiddle encyclopedia articles (including the article images and facts) can be freely used under Attribution-ShareAlike license, unless stated otherwise. Cite this article:
Album Facts for Kids. Kiddle Encyclopedia.