Llandudno Pier is a Grade II* listed pier in the seaside resort of Llandudno, North Wales, United Kingdom. At 2,295 feet (700 m), the pier is the longest in Wales and the fifth longest in England and Wales. In 2005, was voted "Pier of the Year 2005" by the members of the National Piers Society.

At the end of the pier is a deep-water landing stage, completely rebuilt for the third time in 1969, which is used by the Isle of Man Steam Packet Company for occasional excursions to Douglas, Isle of Man, and for an annual visit of the PS Waverley or the MV Balmoral preserved steamers. The June 2007 sailings of the Balmoral were rescheduled to start at Menai Bridge Pier, after it emerged that Llandudno Pier's Landing Stage was no longer safe to use. The Landing Stage was rebuilt in 2012 and the MV Balmoral called there, the first ship since 2006, on 2 July 2015.

Located on the coast of North Wales between Bangor and Colwyn Bay, the pier is very unusual in that it has two entrances, one on the promenade at North Parade and the other, the original entrance, on Happy Valley Road. Between the two entrances is the Grand Hotel. 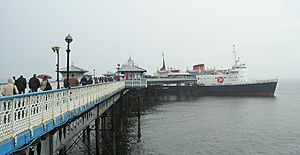 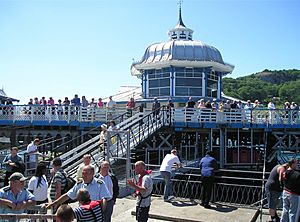 The pier had its origins in a much shorter pier of just 242 feet (74 m) built on 16 wooden piles, opened in 1858 by the St George's Harbour and Railway Company, which had just completed its branch line from Llandudno to Conwy via a junction with the Chester and Holyhead Railway near the present Llandudno Junction railway station to which the branch was soon diverted. That short pier was built to protect the rights of its owners to a much more ambitious scheme to build a major port in Llandudno Bay. Unfortunately, the pier was severely damaged in the Royal Charter Storm of 25 October 1859, which caused the loss of 223 ships and 800 people in British coastal waters. Although repaired and used for a further 16 years, the pier was too short and could only be used by steam ships at high tide. 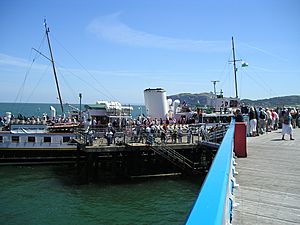 MV Balmoral awaiting passengers for an afternoon cruise to the Menai Bridge, Puffin Island and Red Wharf Bay on 14 July 2006

The present pier was designed by civil engineers Sir James William Brunlees (1816-92, knighted 1886) and Alexander McKerrow (1837-1920) and built by the contractor John Dixon for the Llandudno Pier Company. After the original designs were approved on 29 May 1876 by Parliament, the town's Improvement Commissioners and the Mostyn Estate, revised designs for the ornamental ironwork and elaborate kiosks were worked on by the architects Charles Henry Driver (1832-1900 ) and Charles H. Rew for Brunlees and McKerrow, in close collaboration with the Glasgow Elmbank foundry. The pier was opened to the public on 1 August 1877. The landwards extension to the same design, still in deep water and also supported on iron columns, was opened in 1884 and a new landing stage was added in 1891. In 1969, the landing stage was totally rebuilt in concrete and steel, which enabled its use by the largest Isle of Man Steamers then in use. The wooden decking has been extensively renewed in recent years, and the superstructure is maintained systematically. The pier is currently owned by Tir Prince Leisure Group, a north Wales based leisure company.

Until the Second World War, the public were charged admission to access the pier. Admission allowed the promenaders access to musical entertainment from a bandstand at the pierhead. A small orchestra was established in 1877. The notable French musician, Jules Rivière was appointed to take charge of the orchestra in 1887.

The orchestral performances moved to the Pier Pavilion, built on land adjacent to the main entrance from the promenade, which opened in September 1886. Rivière's Orchestra at the Llandudno Pier Pavilion trebled in size to symphony proportions. The young Henry Wood came to Llandudno to observe the then elderly Rivière at work. The pavilion was destroyed by fire in 1994 and not rebuilt.

All content from Kiddle encyclopedia articles (including the article images and facts) can be freely used under Attribution-ShareAlike license, unless stated otherwise. Cite this article:
Llandudno Pier Facts for Kids. Kiddle Encyclopedia.