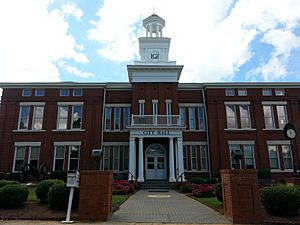 The main academic building now serves as a city hall. The school was founded by the Locust Grove Baptist Church and Mercer University and opened in 1894. The school building was constructed in 1904 for $14,000. Some of the school's wooden structures were destroyed by fire and were replaced by more substantial structures.

All content from Kiddle encyclopedia articles (including the article images and facts) can be freely used under Attribution-ShareAlike license, unless stated otherwise. Cite this article:
Locust Grove Institute Facts for Kids. Kiddle Encyclopedia.