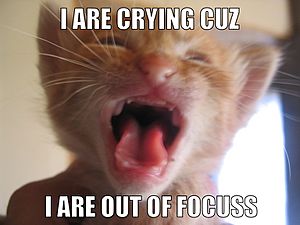 A common lolcat. The phrase "I are crying cuz I are out of focuss" is a typical example of funny language 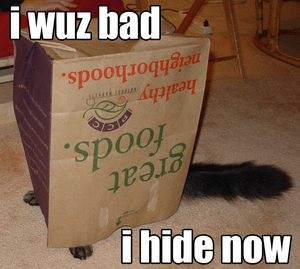 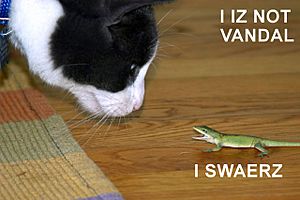 A lolcat is a picture of a cat with a funny caption. The caption is usually in bad English that makes fun of Internet slang. "Lolcat" is a mix of the words lol and cat. Lol is internet slang for "laughing out loud." A different word for lolcat is cat macro because it is a type of image macro. The first time the media talked about lolcats was when Time Magazine covered them in an article. The article said that lolcats and other things like them are becoming rare. It also said that they have a "distinct...Usenet feel to [them]."

Lolcats are pictures of cats doing something out of the ordinary quoted words in big, sans serif letters (letters without feet). Sometimes the picture is changed with a computer to make it funnier.

There are lots of different lolcat memes, like ceiling cat, monorail cat, and 'i eated a butter' cat

All content from Kiddle encyclopedia articles (including the article images and facts) can be freely used under Attribution-ShareAlike license, unless stated otherwise. Cite this article:
Lolcat Facts for Kids. Kiddle Encyclopedia.