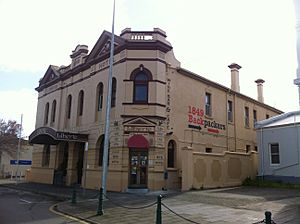 London Hotel from corner of York St and Stirling Tce

The London Hotel is a hotel located on Stirling Terrace overlooking Princess Royal Harbour in Albany in the Great Southern region of Western Australia.

The current building was built in 1909 for the sum of £7,000. The building was designed by architect J. Herbert Eales. The proprietor was Harry C. Sims, with work completed by contractor A. Thompson. It was built on the site of the Chusan Hotel which had stood on the site since 1849 and was rebuilt in 1871.

When it was constructed the two storey brick built hotel was plastered and surrounded by large spacious balconies. The entrance hall was reminiscent of an English mansion; a 22 ft (7 m) by 20 ft (6 m) drawing room opened onto the balcony, as did the dining room of similar proportions. The public bars were located on the ground floor. Sims remained the proprietor of the hotel until 1918. 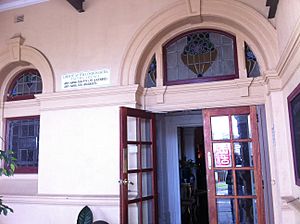 Kester Solomon, a professional gambler, took over the hotel in 2009 and transformed the interior, creating a European style coffee bar and a New York style cocktail bar. The hotel, now known as Liberte, has been refurbished with timber floors, regal wallpaper, mantelpieces and gilded mirrors.

All content from Kiddle encyclopedia articles (including the article images and facts) can be freely used under Attribution-ShareAlike license, unless stated otherwise. Cite this article:
London Hotel, Albany Facts for Kids. Kiddle Encyclopedia.