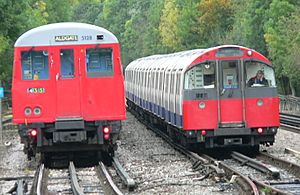 A wide variety of trains have been used on the London Underground. In the early days steam locomotive and carriages were used. Nowadays electric multiple units are used.

The following trains were used in London Underground.

All content from Kiddle encyclopedia articles (including the article images and facts) can be freely used under Attribution-ShareAlike license, unless stated otherwise. Cite this article:
London Underground rolling stock Facts for Kids. Kiddle Encyclopedia.