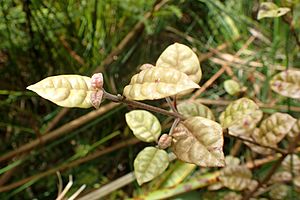 Lophomyrtus bullata, also known by its Māori name of ramarama, is a species of evergreen myrtle shrub in the genus Lophomyrtus, family Myrtaceae. It is found in New Zealand.

Lophomyrtus bullata grows to a height of 8 metres, producing many branches closely packed together. The leaves are oval shaped, thick, shiny and bubbled, varying in colour from dark green to yellow green. They can also appear spotted with red, maroon, or blackish marks.

Ramarama flowers between November and March, and subsequently fruits from January through to June.

As of 2020, ramarama has become severely threatened by myrtle rust (Austropuccinia psidii), a pathogenic fungus that arrived in New Zealand in 2017.

All content from Kiddle encyclopedia articles (including the article images and facts) can be freely used under Attribution-ShareAlike license, unless stated otherwise. Cite this article:
Lophomyrtus bullata Facts for Kids. Kiddle Encyclopedia.