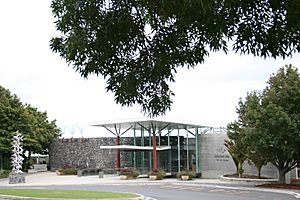 Auckland Botanic Gardens is a 64-hectare botanical garden in Manurewa, South Auckland, New Zealand, owned by Auckland Council. The first purchase of land by the Auckland Regional Authority (ARA) – predecessor of Auckland Regional Council (ARC) – dates back to 1968. Developments started in 1973. The garden was officially opened to the public in 1982. In that same year the first (and until now only) Visitors Guide was published. It now holds more than 10,000 plants.

History of the Gardens

The first concept for a botanical garden in the Auckland region started in 1926, when members of the Auckland District Horticultural Society suggested such an attraction for Auckland. In October, 1928, a report was forwarded to the then Parks Committee of the City Council with recommendations. This was approved by the Committee. The Committee recommended to put aside part of the Auckland Domain for the purpose. "Since then, very little further has been done". In 1945 Churchill Park was considered. In the 1950s many sites were investigated for housing a botanic garden. In 1957 V. J. Chapman, professor of botany at Auckland University College, drew attention to the fact that Auckland, alone among New Zealand's chief cities, had no botanic garden. He pointed out that the city could acquire 80 acres (320,000 m2) of land at the Tamaki property of the University. In 1960 an ad hoc committee was formed to try to find a suitable site and to secure its development as a botanic garden. In 1963 it became clear that land at Tamaki was not feasible. The search continued. Finally, in 1964, an area of land in the Manurewa suburb was examined with positive results.

On 9 February 1968 the Auckland Regional Authority acquired 42 hectares of land from the Nathan Estate in Manurewa, and the Manukau City Council bought the remaining 40 hectares of the Estate, since the property was offered as a whole. The land was leased for grazing until 1970. Soil tests were carried out. These proved that the area was most suitable for a botanic garden.

A scientific advisory committee prepared the first master plan for the Gardens. This was adopted by Council in March 1972. On 19 February 1973 the then Auckland City Councillor, Tom Pearce, turned the first sod. A nursery was established at the eastern end of the Hill Road frontage.

In 1982 the Auckland Regional Authority bought approximately 20.5 ha from Manukau City and accepted from it a gift of 2.2 ha to give the Gardens a northern frontage onto Orams Road.

23 February 1982 the Gardens were officially opened by David Bellamy. At that time the facilities included a visitor centre, the courtyard, the carpark and public toilets. The plant collections were confined to the southern parts of the Gardens.

In 1983 the Sir John Logan Campbell Lecture Building was erected. In 1986 an entrance at Katote Place was constructed in memory of Mr. Harry Beaumont, a former member of both the Auckland Regional Authority and Manukau City Council, and a strong promoter of the establishment of the Gardens. That same year the Unitec Horticultural Classroom and an associated demonstration home garden were opened.

A review of the role and activities of the Gardens was undertaken in 1988–89 by a working party.

In the early 1990s a covered courtyard and the Friends Horticultural Reference library were opened. Redevelopment of garden collections were undertaken in the 2000s such as the Heritage Rose Garden, New Zealand Rose Garden and the South African garden. A new significant addition to the garden was the opening of the Threatened Native Plant Garden by the Prime Minister Helen Clark on 29 September 2001. This was followed by another significant development of a new Children's Garden, formally opened by the Prince of Wales on 10 March 2005. On the same year a new Visitor Centre building was constructed and opened.

A biennial sculpture exhibition (Sculpture in the Gardens), showcasing selected large-scale public sculptures, commenced in 2007 running for 3 months over the summer season. Another round of garden redevelopment occurred in the late 2000s with a major revamp of the Edible Gardens into themed rooms and a second stage added to the Children's Garden. From 2010 onwards, a series of low-impact and water treatment/ stormwater design initiatives were added around the garden such as 2 living roof buildings, vegetated swales, rain gardens and riparian planting around the central lakes.

Annual visitation to the Gardens reached 969,000 people in 2009/2010 and has increased to around one million people each year ever since.

The mission of Auckland Botanic Gardens is threefold:

Research in the Botanic Gardens has been mainly directed on identifying plants that are best suited to growing in local conditions. Three panels have been active, on natives, on trees and shrubs, and on bulbs and perennials. As a result of this research a great number of Advisory Leaflets was published, together forming the dossier "Gardening in Auckland – Horticultural advice for Auckland gardeners" (published regularly since 1981), freely available at the visitor centre. Much of the trials have been conducted in the Shrub Trial Garden. Here some extensive collections have been created of Hydrangea, azalea, Deutzia and other genera. Nowadays the advisory work is still continued and the Advisory Leaflets are still updated regularly.

Auckland Botanic Gardens holds plants from both NZ and elsewhere in the world which are threatened with extinction. There are also collections of plant cultivars which are now uncommon in cultivation. Growing these plants enables the Gardens to provide plant material for research, education, cultivation and reintroduction back into the wild or commercial horticulture. 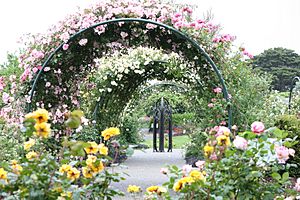 Important collections of the Auckland Botanic Gardens include:

- The New Zealand Native Plant Identification Trail: a short walk highlighting characteristics of a selection of NZ native plants
- The Native Forest Trail: a marked walk that leads through a broadleaf/podocarp forest remnant with a total of about 30 hectares. 10 hectares are part of and managed by the Botanic Gardens. 20 hectares are part of 'Totara Park', managed by the Manukau City Council. The area was cut in earlier times to harvest timber. The forest is now regenerating. There are a number of tracks in the area. One of the tracks is described in a leaflet with information on plants and trees. The flora of the combined area consists of 158 species in total.
- The Harakeke (Phormium) Collection, with a large number of cultivars traditionally used by Maori for weaving.
- The Threatened Native Plant Collection, opened 2001 by Helen Clark, ex-Prime Minister of New Zealand. Here we find for instance fine specimen of Three Kings (Trumpet) Vine Tecomanthe speciosa and of Shore Spurge.
- Native Plant Ideas: ornamental native plants combined in creatively designed gardens.

There are a number of other smaller collections, for instance a collection of conifers, with a specimen of Keteleeria davidiana and Bishop Pine Pinus muricata.

The database, that lists all the plants in the collections, is available for consultation in the Visitor Centre.

The Visitor Centre Huakaiwaka is a modern building, opened 2005 that houses the information desk, information displays, a café, and offices.

The Horticultural Reference Library is housed in a separate building. The building was opened in 1992 and was funded by the Friends of the Auckland Botanic Gardens. It contains some 2,500 books and a number of horticultural journals and magazines. The catalogue holds about 10,000 items. The library is open to the public.

The huge impact of the activities of the Friends is clearly demonstrated by the fact that in 1989 the library housed only 400 volumes in the Information Centre, that were solely used for reference by staff.

The Ellerslie Flower Show was a very successful event which eventually outgrew its original location at the Ellerslie Race Course. For a number of years the Botanic Gardens were used for the show until 2008 when it moved to Hagley Park in Christchurch.

All content from Kiddle encyclopedia articles (including the article images and facts) can be freely used under Attribution-ShareAlike license, unless stated otherwise. Cite this article:
Auckland Botanic Gardens Facts for Kids. Kiddle Encyclopedia.