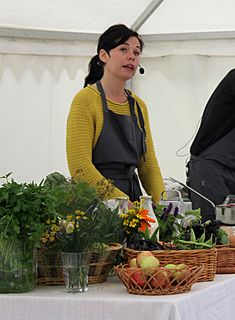 Lotta Lundgren (born 26 January 1971) is a Swedish television presenter and food writer. Lundgren was born and raised in Tuve, a Gothenburg suburb. Lundgren has written a cook book. She has hosted the shows Landet Brunsås and currently Historieätarna along with Erik Haag both on SVT. In 2015, the duo presented Tusen år till julafton a Christmas calendar which was broadcast on SVT.

Lundgren divorced her husband in December 2013.

All content from Kiddle encyclopedia articles (including the article images and facts) can be freely used under Attribution-ShareAlike license, unless stated otherwise. Cite this article:
Lotta Lundgren Facts for Kids. Kiddle Encyclopedia.