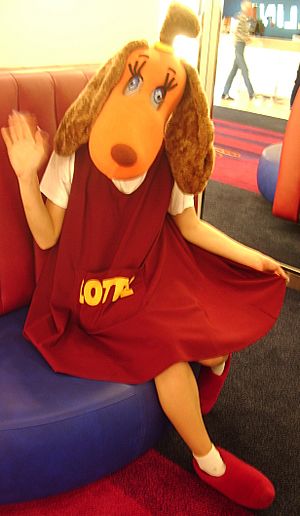 Lotte is the main character in Estonian children book series and animated films, of which some of the better known are Lotte from Gadgetville (2006) and Lotte and the Moonstone Secret (2011).

Lotte is created by Janno Põldma and Heiki Ernits. Lotte has dog-like head, red hair and she is rather mischievous girl. Lotte lives in Gadgetville (Estonian: Leiutajateküla).

Texts about Lotte is written by Andrus Kivirähk.

Because of Lotte popularity in Estonia, Lotte-related theme park (or Lotte Village) was opened in 2014 in Reiu village, Pärnu County. The park is operated by Lottemaa Teemapark OÜ.

All content from Kiddle encyclopedia articles (including the article images and facts) can be freely used under Attribution-ShareAlike license, unless stated otherwise. Cite this article:
Lotte (Estonian literature) Facts for Kids. Kiddle Encyclopedia.