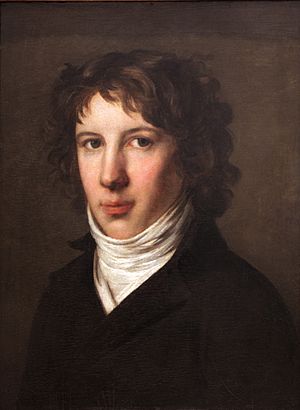 Portrait of Saint-Just by Pierre-Paul Prud'hon

Saint-Just (called the Angel of Death) was an important person in the French revolution and the Reign of Terror. He worked closely with Robespierre.

All content from Kiddle encyclopedia articles (including the article images and facts) can be freely used under Attribution-ShareAlike license, unless stated otherwise. Cite this article:
Louis de Saint-Just Facts for Kids. Kiddle Encyclopedia.