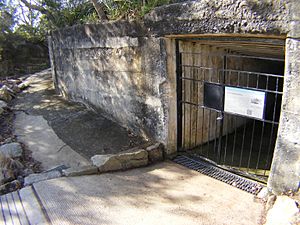 The main entrance to the fortification command position at Georges Heights 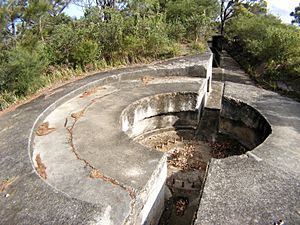 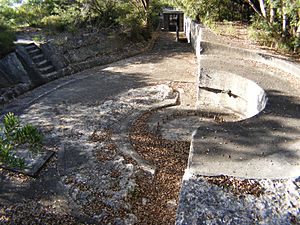 The two cannons that were first placed at the site were RML 9 inch 12 ton guns. Rifled Muzzle Loaders (RMLs) are artillery pieces loaded from the muzzle, but with a rifled bore liner, invented in the mid-19th century. In contrast to smooth bore cannon which preceded it, the rifling of the gun barrel allowed much greater accuracy and penetration as the spin induced to the shell gave it directional stability. Initially smooth-bore cannon were converted into rifles by re-boring and lining; but later new guns were manufactured from scratch as RMLs. The RML 9 inch 12 ton gun could discharge shells weighing 249 pounds (113 kg) as far as South Head (Watsons Bay); approximately 3,000 yards (2,770 metres).

From 1903 to 1907 the fortifications were upgraded to allow for the installation of two BL 6 inch Mark 7 guns that were “breech loading” which meant that the explosive charge and projectile were to be loaded into the rear of the cannon. They could fire a 100-pound (45.4 kg) shell a long way out to sea; up to 14,000 yards (12,900 metres).

The underground rooms of the fortifications were used to store ammunition and charges which were brought along Military Road, giving the road its name.

All content from Kiddle encyclopedia articles (including the article images and facts) can be freely used under Attribution-ShareAlike license, unless stated otherwise. Cite this article:
Lower Georges Heights Commanding Position Facts for Kids. Kiddle Encyclopedia.