Lucy's Cafe was an Italian restaurant located in Hershey, Pennsylvania that was family-owned and operated for more than 75 years. The restaurant's meatballs were from a homemade recipe and were popular throughout the state; they were at one time sold at Hershey Bears hockey games. 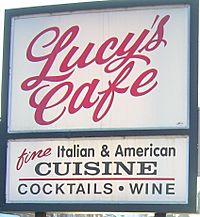 Lucy's Cafe was founded by sisters Josephine Fromboluti and Lucia Santoro after their immigration from Italy. Mary Tatangelo, daughter of Fromboluti, ran the restaurant for the bulk of its history. She shared ownership with sons Tony and Robert Tatangelo in the 1970s and '80s. While Mary continued to remain active in the family business she built, Tony was the sole proprietor of Lucy's Cafe from 1989 until its closing in 2007.

Celebrities such as Joe Paterno, Michael Bolton, Jim Kelly, Lynn Swann, and many more frequented Lucy's Cafe throughout the years. The restaurant also was visited annually by players and coaches of the Big 33 Football Classic.

In October 2007, local newspapers confirmed rumored reports that Lucy's Cafe had been sold. The purchase was made by Hershey Entertainment and Resorts Company (also known as HERCO). Coincidentally, Lucy's Cafe had formerly sold meatballs to the GIANT Center, home arena of the Hershey Bears (an AHL team owned by HERCO), for sale at the team's games. The restaurant's final day of business was December 31, 2007.

On January 21, 2008, a fire damaged much of the building that was once Lucy's Cafe. The cause of the fire was suspected to be an oil tank that may have caught fire.

Lucy's Cafe was known regionally for its meat sauce and hand-rolled meatballs, which were sold both in the restaurant with meals and "to go" in container sizes ranging from quart to gallon.

The meatballs were so well known that for several years they were sold at Hershey Bears' (an American Hockey League team) home games.

All content from Kiddle encyclopedia articles (including the article images and facts) can be freely used under Attribution-ShareAlike license, unless stated otherwise. Cite this article:
Lucy's Cafe Facts for Kids. Kiddle Encyclopedia.