James Edward Kelly (born February 14, 1960) is a former American football quarterback who played in the National Football League (NFL) for eleven seasons and spent the entirety of his NFL career with the Buffalo Bills. He also played two seasons with the Houston Gamblers in the United States Football League (USFL). 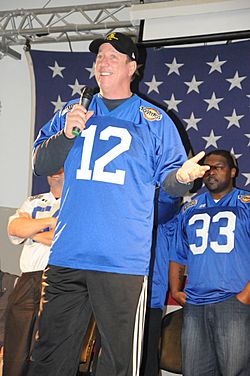 Kelly was born in Pittsburgh, Pennsylvania, and grew up about 60 miles to the northeast, in East Brady. He was a standout at East Brady High School and won all-state honors after passing for 3,915 yards and 44 touchdowns. After his senior year, Kelly played in the Big 33 Football Classic.

Kelly also played basketball in high school, scoring over 1,000 points with six 30-plus-point games. As a senior, he led East Brady to the basketball state semifinals and averaged 23 points and 20 rebounds.

Kelly was offered a linebacker scholarship instead of quarterback to play college football at Penn State University under coach Joe Paterno.

He went on to play for the University of Miami, where he played an important role in helping build the program into one of the nation's best. Kelly finished his career at Miami with 406 completions in 646 attempts for 5,233 yards and 32 touchdowns; he was inducted into the university's hall of fame in 1992. 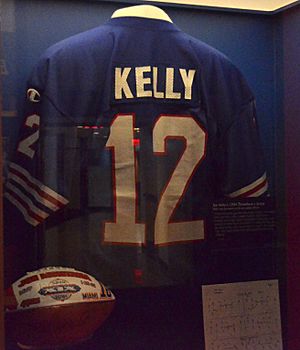 Kelly was selected by the Bills in the first round of 1983 NFL draft and was taken fourteenth overall. He chose to sign with the Gamblers instead and did not play for the Bills until the USFL folded in 1986. Employing the "K-Gun" offense, known for its no-huddle shotgun formations, Kelly led one of the greatest NFL scoring juggernauts. From 1991 to 1994, he helped guide the Bills to a record four consecutive Super Bowls, although the team lost each game.

In 2002, Kelly was inducted into the Pro Football Hall of Fame, his first year of eligibility. His jersey number 12 is one of two numbers retired by the Buffalo Bills.

All content from Kiddle encyclopedia articles (including the article images and facts) can be freely used under Attribution-ShareAlike license, unless stated otherwise. Cite this article:
Jim Kelly Facts for Kids. Kiddle Encyclopedia.