Lumbricus terrestris is a large reddish worm native to Europe, but now also widely distributed elsewhere around the world (along with several other lumbricids), due to human introductions. In some areas where it has been introduced, some people consider it to be a serious pest species, since it is out-competing locally native worms.

Through much of Europe it is the largest naturally occurring species of earthworm, typically reaching 20 – 25 cm in length when extended (though in parts of southern Europe there are native species which are much larger).

Because it is widely known, Lumbricus goes under a variety of common names. In Britain, it is primarily called the common earthworm or lob worm (though the name is also applied to a marine polychaete). In North America, the term nightcrawler (or vitalis) is also used. In Canada, it is also called the dew worm, or "Grandaddy Earthworm". In the rest of the world, most references are just to the scientific name, though with occasional reference to the above names.

Although this is not the most abundant earthworm, even in its native range, it is a very conspicuous and familiar earthworm species in garden and agricultural soils of the temperate zone, and is frequently seen on the surface, unlike most other earthworms. It is also used as the example earthworm for millions of biology students around the world, even in areas where the species does not exist. However, 'earthworm' can be a source of confusion, since in most of the world, other species are more typical. For example, through much of the unirrigated temperate areas of the world, the "common earthworm" is actually Aporrectodea (=Allolobophora) trapezoides, which in those areas is a similar size and dark color to L. terrestris. 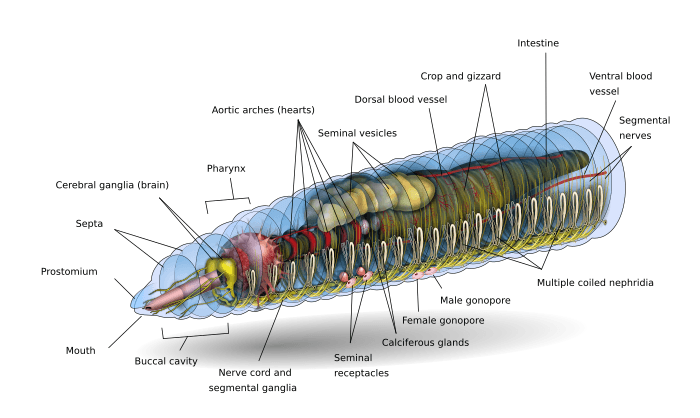 L. terrestris is an anecic worm. That is, it forms temporary deep burrows and comes to the surface to feed, as opposed to burrowing through the soil for its food as most other earthworms do. An unusual habit of this species is to pull leaves into the mouth of its burrow where they partially decay before being eaten. While they generally feed on plant material, they have been observed feeding on dead insects and feces.

The natural lifespan of L. terrestris is unknown, though individuals have lived for six years in captivity.

In parts of Europe, notably the Atlantic fringe of northwestern Europe, it is now locally endangered due to predation by the New Zealand flatworm (Arthurdendyus triangulatus) and the Australian flatworm (Australoplana sanguinea), two predatory flatworms accidentally introduced from New Zealand and Australia. These predators are very efficient earthworm eaters, being able to survive for lengthy periods with no food, so still persist even when their prey has dropped to unsustainably low populations. In some areas, this is having a seriously adverse effect on the soil structure and quality. The soil aeration and organic material mixing previously done by the earthworms has ceased in some areas.

All content from Kiddle encyclopedia articles (including the article images and facts) can be freely used under Attribution-ShareAlike license, unless stated otherwise. Cite this article:
Lumbricus terrestris Facts for Kids. Kiddle Encyclopedia.