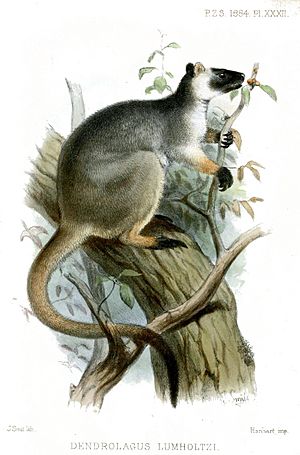 Lithograph of Dendrolagus lumholtzi by Joseph Smit, from Proceedings of the general meetings for scientific business of the Zoological Society of London, 1884

Lumholtz's tree-kangaroo (Dendrolagus lumholtzi) is a heavy-bodied tree-kangaroo found in rain forests of the Atherton Tableland Region of Queensland. Its status is classified as near threatened by the IUCN, and authorities consider it as rare. It is named after the Norwegian explorer Carl Sofus Lumholtz (1851–1922), who was the first European to record a specimen in 1883. The local indigenous Dyirbal and Yidiny language name may have been either Mabi or Mapi

It is the smallest of all tree-kangaroos, with males weighing an average of 7.2 kg (16 lbs) and females 5.9 kg (13 lbs). Its head and body length ranges from 480–650 mm, and its tail, 600–740 mm. It has powerful limbs and has short, grizzled grey fur. Its muzzle, toes and tip of tail are black. The Lumholtz's tree-kangaroos colonizes a variety of habitats, as long as they are flush with food and have stable and adaptable structural features.

Lumholtz's tree-kangaroo are generally solitary animals, with the exception of male-female mating and the long, intimate mother-joey relationship. Each kangaroo maintains a "home range" and will be hostile towards a member of the same sex that enters it (the one exception seems to be non-hostile encounters between adult males and their male offspring). Thus, the male will protect his own range, and visit the ranges of the females in his group. Mating takes place in episodes of about twenty minutes, and is often quite aggressive.

In June 2019, it was reported that many Lumholtz's tree-kangaroos were going blind. Normally almost invisible in the treetops, they were being found in schools, sheds and in the middle of roads, unable to see and confused. Veterinarian Dr Andrew Peters, from Charles Sturt University, said he'd found evidence of optic nerve and brain damage, suggesting that a new viral infection was involved.

Dr. Karen Coombes, who has cared for injured tree kangaroos on her property west of Cairns for two decades, said she thought successive dry periods in the area were contributing to the eye problems. Her theory is that, because the animals only eat the leaves of the rainforest trees they inhabit, which are always fairly toxic, the drier-than-normal weather over recent years could have caused the toxins in the leaves to become more concentrated. No toxin has been identified and this hypothesis remains speculative and unsubstantiated.

Other work by wildlife veterinarian, Dr. Amy Shima and wildlife biologist, Roger Martin (author of Tree-kangaroos of Australia and New Guinea), does not support these claims. Their fieldwork spanning 5 years has found no convincing evidence of widespread blindness in Lumholtz's tree-kangaroo. Working with a comparative veterinary ocular pathologist from a university in the USA, Dr. Shima has looked at nearly 100 eyes from Lumholtz's tree-kangaroo carcasses (primarily road-killed animals) and has found no evidence of widespread blindness or pathology. These findings were recently presented in a poster presentation at the international Wildlife Disease Association conference.

All content from Kiddle encyclopedia articles (including the article images and facts) can be freely used under Attribution-ShareAlike license, unless stated otherwise. Cite this article:
Lumholtz's tree-kangaroo Facts for Kids. Kiddle Encyclopedia.