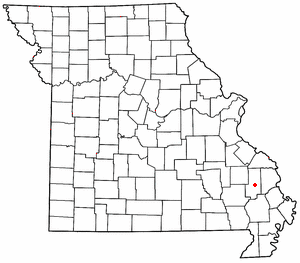 Lutesville was a city in Bollinger County, Missouri. It was adjacent to and southwest of Marble Hill on Route 51 and Route 34. In 1869, the city was laid out to secure a St. Louis, Iron Mountain and Southern Railway depot location. It was named for its founder, Eli Lutes. The railroad ceased operations through Lutesville in 1973.

All content from Kiddle encyclopedia articles (including the article images and facts) can be freely used under Attribution-ShareAlike license, unless stated otherwise. Cite this article:
Lutesville, Missouri Facts for Kids. Kiddle Encyclopedia.