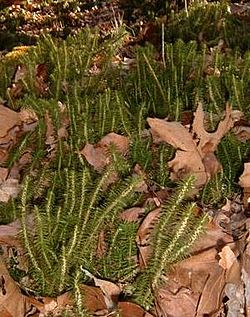 Clubmosses are thought to be structurally similar to the earliest vascular plants, with small, scale-like leaves, homosporous spores borne in sporangia at the bases of the leaves, branching stems (usually dichotomous), and generally simple form.

A powder known simply as lycopodium, consisting of dried spores of the common clubmoss, was used in Victorian theater to produce flame-effects. A blown cloud of spores burned rapidly and brightly, but with little heat. It was considered safe by the standards of the time.

The group is now split into two families:

All content from Kiddle encyclopedia articles (including the article images and facts) can be freely used under Attribution-ShareAlike license, unless stated otherwise. Cite this article:
Clubmoss Facts for Kids. Kiddle Encyclopedia.