Māhia Peninsula (Maori: Māhia or Te Māhia) is located on the east coast of New Zealand's North Island, in the Hawke's Bay region, between the cities of Napier and Gisborne.

Rocket Lab has set up its Launch Complex 1 close to Ahuriri Point at the southern tip of the peninsula to launch its Electron rocket. Test launches of the Electron started in 2017. During regular operations, it will be used as a commercial launcher of small satellites in the range of 135–235 kg, and miniature satellites called CubeSats. New Zealand's first orbital space launch took place from Launch Complex 1 on 21 January 2018. 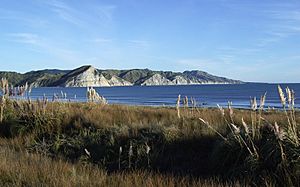 The statistical area of Mahia, which at 472 square kilometres is larger than the peninsula and includes Nuhaka, had a population of 1,119 at the 2018 New Zealand census. This was a decrease of 153 people (−12.0%) since the 2006 census. There were 456 households. The median age was 49 years, compared with 37.4 years nationally. Ethnicities were 64.9% Māori, 48.8% European/Pākehā, 1.1% Pacific peoples, 0.8% Asian, and 1.3% other ethnicities (totals add to more than 100% since people could identify with multiple ethnicities). This compares with a 16.5% of New Zealanders identifying as Māori.

Although some people objected to giving their religion, 35.4% had no religion, 49.3% were Christian and 9.1% had other religions.

In Maori legend, Whatonga, who came to New Zealand in search of his grandfather Toi, settled at Mahia.

The peninsula is the tribal area of the Ngāti Rongomaiwahine iwi. The word māhia means "indistinct sound" or "scrofulous swelling". The name "Te Māhia" comes from "Te Māhia-mai-tawhiti" (the sound heard from a distance).

Portland Island, also called Waikawa, is a small island off the southern tip of Mahia Peninsula. It was named Waikawa by Kahungunu when he visited there to look for fresh drinking water and only found salt water – Waikawa means "sour water". Portland Island has an unmanned lighthouse.

Shore whaling was briefly important on the Mahia Peninsula. Early whalers had a whaling station on the farm "Kini Kini", sheltered by "Long Point" on the west coast of the peninsula. The peninsula community these days is still generally a mix of Maori and European.

Prime Minister Jacinda Ardern was proposed to by her partner, Clarke Gayford, on Mokotahi Hill.

There are four marae in the Mahia area affiliated with the hapū of the Ngāti Kahungunu iwi: 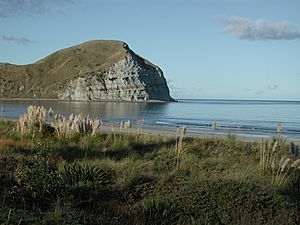 Mahia Beach in the morning

Sheep and cattle farms are an important part for the local community, but tourism is now the peninsula's main industry. Mahia's population swells greatly during the warmer months and in particular during school holidays.

Mahia is well known for its surf, scuba diving, hiking, and fishing. Morere Hot Springs is 15 minutes away, towards Gisborne. The area is a popular school holiday destination and contains a holiday park dating back to the 1960s. The remaining settlement consists mostly of holiday houses and baches.

All content from Kiddle encyclopedia articles (including the article images and facts) can be freely used under Attribution-ShareAlike license, unless stated otherwise. Cite this article:
Māhia Peninsula Facts for Kids. Kiddle Encyclopedia.