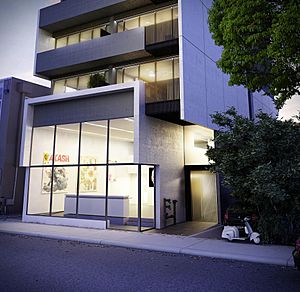 [MARS] was established by gallerist Andy Dinan in 2004, who converted a former dairy in Port Melbourne into a two-level contemporary gallery. In 2014, [MARS] relocated to a new purpose-built gallery at 7 James St, Windsor, (in the City of Stonnington).

MARS specialises in exhibiting, promoting and building the careers of contemporary Australian artists. The gallery has participated in a number of national art fairs including the Melbourne Art Fair, Spring 1883 and Sydney Contemporary. MARS also exhibits in international art fairs.

[MARS] is a member of ACGA, the leading national body and collective voice representing commercial art galleries in Australia.

The new [MARS] at Windsor was designed by Chris Manton of Jam Architects. The three-level space incorporates amenities for showing new media such as sound sculpture, video and light art. The gallery has four distinct exhibition spaces, including a custom black-box gallery committed to the exhibition of contemporary video art, a light-box room for the display of light and sound works, a drawing room to exhibit works on paper as well as a rooftop sculpture garden accessible by an elevator with a light artwork installed into the elevator shaft by artist Jason Sims.

[MARS] is committed to environmental sustainability, and the gallery features a number of environmental design elements including recycled timber floors, solar roof panels and rainwater collection and harvesting.

[MARS] also offers a rental art program, which seeks to support contemporary artists, through the acquisition and placement of artworks in private and public spaces.

MARS Gallery has participated in three consecutive years at Art Central Hong Kong (2017-2019). In 2018 the gallery was invited to Volta 14, Basel where MARS was the only Australian gallery to exhibit at the art fair. MARS also exhibited at Art Fair Tokyo (2016) and Korean International Art Fair (2012).

All content from Kiddle encyclopedia articles (including the article images and facts) can be freely used under Attribution-ShareAlike license, unless stated otherwise. Cite this article:
MARS Melbourne Art Rooms Facts for Kids. Kiddle Encyclopedia.