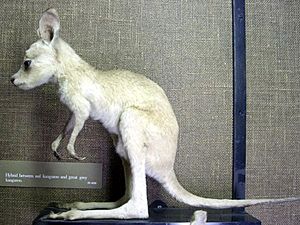 A hybrid (juvenile) of a red kangaroo and an eastern grey kangaroo, Rothschild Museum, Tring

Macropod hybrids are hybrids of animals within the family Macropodidae, which includes kangaroos and wallabies. Several macropod hybrids have been experimentally bred, including:

Some hybrids between similar species have been achieved by housing males of one species and females of the other together to limit the choice of a mate. To create a "natural" macropod hybrid, young animals of one species have been transferred to the pouch of another so as to imprint into them the other species. In-vitro fertilization has also been used and the fertilized egg implanted into a female of either species.

All content from Kiddle encyclopedia articles (including the article images and facts) can be freely used under Attribution-ShareAlike license, unless stated otherwise. Cite this article:
Macropod hybrid Facts for Kids. Kiddle Encyclopedia.