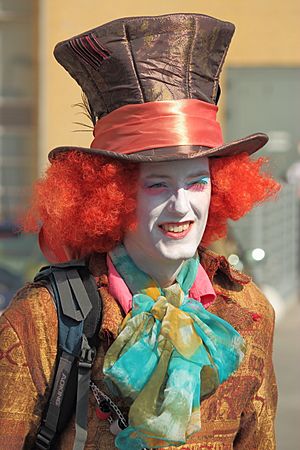 The Mad Hatter (Jervis Tetch) is a fictional Batman character who appears in comic books by DC Comics. He dresses-up as the Mad Hatter from Alice in Wonderland. He usually uses had-guns, poison smoke guns, or mind-control things. He used to be a scientist who invented mid-control things before being fired.

He was voiced by Roddy McDowall in Batman: The Animated Series.

All content from Kiddle encyclopedia articles (including the article images and facts) can be freely used under Attribution-ShareAlike license, unless stated otherwise. Cite this article:
Mad Hatter (comics) Facts for Kids. Kiddle Encyclopedia.