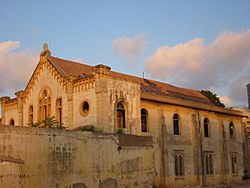 The Maghen Abraham Synagogue is the oldest synagogue in Beirut, capital of Lebanon. A synagogue is where Jews go to pray. But, this synagogue is old, and no one used it for long. But, people in Beirut can still see it in Wadi Abu Jamil, the place where Lebanese Jews used to live. Today, some Lebanese Jews are trying to repair the synagogue, so that they can use it again.

This synagogue was very important to Jewish Lebanese in the early twentieth century. It was built in 1925. It was then named after the son of Abraham Sason. Also, it was used as a place to stay for illegal travelers. Some of the people who traveled without legal papers stayed in the synagogue while going to Palestine. Today, it is now called Israel.

In 1976, a year after the civil war began, Joseph Farhi took the Torah scrolls from the synagogue to Geneva. Most of them were sent to Sephardic synagogues in Israel.

Israel attacked its enemies in Lebanon. This brought anger by other people towards Lebanese Jews. Lebanese Jews became targets to Islamic militant groups since 1984. But even during the fighting, Yasser Arafat's PLO forces and the Christian Phalangists did protect Wadi Abu Jamil during the 1982 Lebanon War. But, the presence of Palestine Liberation Organization forces in the area brought Israeli attacks that damaged the synagogue itself.

The late former Prime Minister Rafik Hariri wanted to rebuild the synagoge, but that never happened. The Talmudic school next to it was broken down. This was to keep view of the beach nearby.

All content from Kiddle encyclopedia articles (including the article images and facts) can be freely used under Attribution-ShareAlike license, unless stated otherwise. Cite this article:
Maghen Abraham Synagogue Facts for Kids. Kiddle Encyclopedia.