Maik Zirbes (born January 29, 1990) is a German professional basketball player for Shabab Al Ahli of the UAE National Basketball League. He also represents the senior German national basketball team in the international competitions. Standing at 2.08 m (6 ft 10 in), he plays the center position.

Zirbes first played soccer, but opted to focus on basketball when he was 12 years old. He started his basketball career in the youth set up of TBB Trier before signing his first professional contract with TBB at the age of 17. In the 2008–09 campaign, Zirbes was named Most Valuable Player of the German youth league NBBL.

Zirbes played with TBB Trier until signing a three-year contract with Brose Baskets in June 2012.

On July 17, 2018, he returned to Crvena zvezda. During his one year stint with KK Crvena zvezda, Zirbes averaged 7.7 points and 4 rebounds in just over 15 minutes per game. His best game was on October 8, 2018 in a 87–71 win against KK Budućnost in the round 2 of the ABA League regular season, where he scored 19 points and grabbed 6 rebounds in 22 minutes. After being cut from the roster for the Basketball League of Serbia, on May 3, 2019, Zirbes signed for the Guangxi Weizhuang of the National Basketball League (China).

On September 26, 2019, he has signed with Cedevita Olimpija of the Slovenian League.

On July 12, 2020, he has signed with Shabab Al Ahli of the UAE National Basketball League. 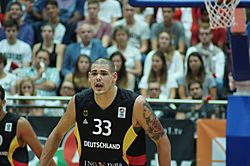 Zirbes represented the German Junior National Teams at the 2008 FIBA Europe Under-18 Championship and the 2010 FIBA Europe Under-20 Championship. He was handed his first cap with the senior German national basketball team in August 2009, when Germany took on the Netherlands. In 2013, Zirbes was a member of Germany's roster at the 2013 EuroBasket, in Slovenia.

All content from Kiddle encyclopedia articles (including the article images and facts) can be freely used under Attribution-ShareAlike license, unless stated otherwise. Cite this article:
Maik Zirbes Facts for Kids. Kiddle Encyclopedia.