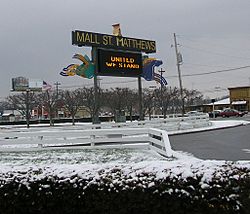 Mall St. Matthews is a Louisville, Kentucky shopping mall located at 5000 Shelbyville Road (US 60) in the eastern suburb of St. Matthews. 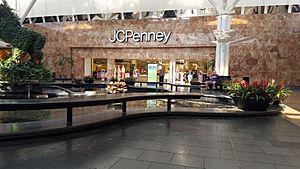 Originally named simply "The Mall", the facility was the first enclosed suburban shopping mall in the state of Kentucky. It was developed by the Rouse Company and opened on May 30, 1962. Located next to the Watterson Expressway, the mall had A & P, Kaufman-Straus, and Rose's as its anchor stores. The JCPenney anchor store was added in a later mall expansion in the 1960s. The mall's features included a children's play area (including some turtle characters to climb on) near Rose's (which is now a food court), an oversize chess set near Kaufman-Straus, and numerous fountains. The name of the mall was changed to The Mall in St. Matthews as other malls were built, but the mall gradually declined with stores moving to newer malls. In the late 1980s, the mall name was simplified to Mall St. Matthews and remodeled to include a food court in the early 1990s, The Limited/Express, a wing dedicated to Limited Brands was added, and expanded the former Kaufman-Straus store (which had become both a Stewart Dry Goods and L. S. Ayres before closing) to accommodate a Bacon's department store which relocated from its freestanding location at 3937 Shelbyville Road. As more retail stores wanted to move to the mall after these changes, a new wing was built which resulted in the re-routing of Sherburn Lane to the west of the new wing.

The mall formerly has a Chuck E. Cheese's Pizza Time Theatre which operated from 1982 until Christmas day 1991. The mall expanded again in 1995 with a new wing and the addition of Dillard's, and in 1997 Lord & Taylor followed suit. In 1998 the Bacon's chain was merged into Dillard's, and the former Bacon's location became the Dillard's Men's, Children's & Home store. In 2000 Nordstrom tentatively agreed to build a store, but withdrew in 2001 before a concrete agreement was reached with Rouse. Lord & Taylor closed their store in early 2004, a portion being occupied by regional junior department store Dawahares until early 2007. The mall took out 2 fountains in 2007, one in the food court area and the other in front of Kay Jewelers and Starbucks. Floor tiles replaced the fountains along with new tables and seating.

The mall is currently owned by Brookfield Properties Retail Group, which also owns Oxmoor Center on the other side of the Watterson Expressway. Its major stores include a Dillard's store divided into two sub-stores and JCPenney. A 10-screen Cinemark multiplex that opened on May 16th, 2013 is physically attached to the mall, but is separately owned and has no access to the rest of the mall.

On December 26, 2015 a disturbance occurred at the mall involving as many as 2,000 people – mostly teenagers – some of whom were fighting each other and shoving or pushing mall customers, and the mall was closed early in response to the incident. Following the incident, the mall had a temporary policy requiring visitors between ages 10 and 17 to be accompanied by someone at least 21 years old after 4 pm on Fridays and Saturdays.

On August 10, 2017, it was announced that the mall's food court will be getting a major renovation which will include new floor tiles and furniture, removal of the railing and elevated platform seating, new furnishings, upgrades to a nearby restroom, downsizing Forever 21, to 30,000 square feet only on part of the first floor which was announced on June 6, a Dave & Buster's on the second floor of the Forever 21 building also announced on June 6 which is scheduled to open in 2018, and an Ulta Beauty on the remainder of the first floor of the Forever 21 building. The mall may even get a partial upper level with stairs, elevators, and escalators. The renovations will be complete by November 6.

All content from Kiddle encyclopedia articles (including the article images and facts) can be freely used under Attribution-ShareAlike license, unless stated otherwise. Cite this article:
Mall St. Matthews Facts for Kids. Kiddle Encyclopedia.