Melaleuca acuminata, commonly known as mallee honeymyrtle is a plant in the myrtle family, Myrtaceae and is native to Australia and widespread in temperate areas of the continent. It is an erect shrub to about 3 m (9.8 ft) usually found in mallee woodland.

Melaleuca acuminata is an erect, rather open shrub with papery or fibrous bark and many ascending branches. The leaves are in alternating pairs on either side of the stem (decussate), narrow elliptic in shape, 5–10 mm (0.2–0.4 in) long, 2–4 mm (0.08–0.2 in) wide with a short petiole. 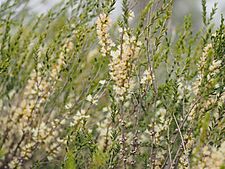 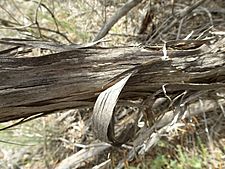 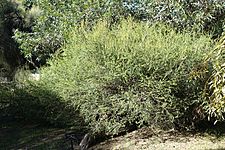 The flowers are cream or white, sometimes tinged with pink and are in cluster of three to six, the clusters occurring along the stem over a considerable length. The stamens are grouped into five clusters or "claws" and there are 9 to 17 stamens per claw. Flowering occurs in spring and is followed by fruit which are smooth, woody capsules, 3–5 mm (0.1–0.2 in) diameter borne singly or in small clusters.

Melaleuca acuminata was first described in 1858 by Ferdinand von Mueller in Fragmenta Phytographiae Australiae from a specimen found "in the stony hills of Mount Barker Creek by L. Fischer". The specific epithet (acuminata) is from the Latin acumen, meaning "sharp point" referring to the leaf tips.

There are two subspecies varying in their leaf sizes and distributions:

Melaleuca acuminata subsp. websteri (S.Moore) Barlow ex. Craven is restricted to Western Australia. It has narrower leaves and the flowers have a shorter hypanthium. The subspecies name (websteri) honours Leonard Clarke Webster, an Australian botanical collector and later a doctor.

Mallee honeymyrtle occurs in Western Australia in the Carnarvon, Coolgardie, Avon Wheatbelt, Esperance, Jarrah Forest and Mallee biogeographic regions; in South Australia it is found in the far south-east corner of the state; in western Victoria, in the Murray Mallee, Lowan Mallee, Wimmera, Goldfields and Greater Grampians biozones, and in New South Wales it is rare and found only in the Balranald district. It grows in mallee communities on sandhills in New South Wales or elsewhere, in sandy or clayey soils in swampy depressions or rises, often in saline conditions.

This melaleuca is adaptable and easy to grow and when well supplied with water grows more vigorously than usually seen in the wild.

All content from Kiddle encyclopedia articles (including the article images and facts) can be freely used under Attribution-ShareAlike license, unless stated otherwise. Cite this article:
Mallee honeymyrtle Facts for Kids. Kiddle Encyclopedia.